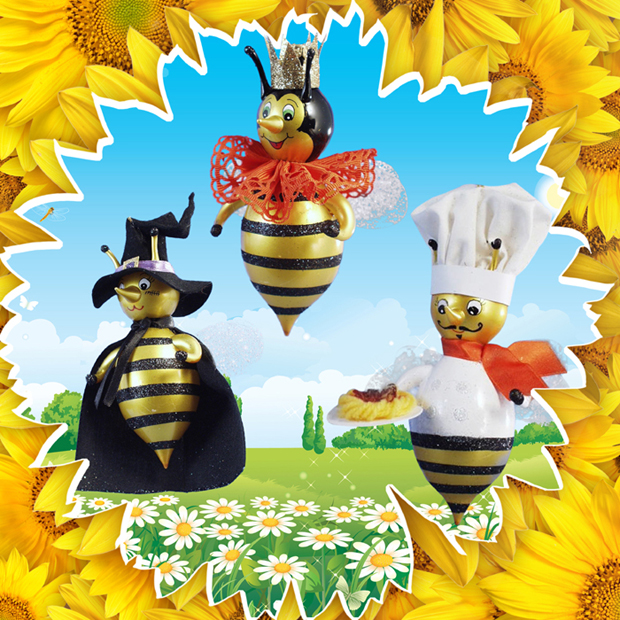 The Cottage Shop carries a variety of De Carlini bee ornaments. These adorable unique ornaments add the perfect touch to nay Christmas tree! De Carlini Club members will be notified of any new selections and will have the opportunity to purchase before they become available to the general public. If you are interested, join today and receive $10.00 off your purchase!

There are over 20,000 species of bee around the world. Bees live on nectar and pollen. They transfer pollen between flowering plants and in return helps keep the cycle of life turning. One bee colony can pollinate 300 million flowers each day. Bees are the most important pollinator of food crops. One third of the food we consume each day rely on pollination by bees. Bees contribute to interconnecting ecosystems which allow diverse species to co-exist. Bees build elaborate hives and their pollination is vital in the growth of woodlands and tropical forests which are home to millions of animals and insects.

There are 7 species and 44 subspecies of honeybees in the world. Honeybees are known for their production of honey and usage of wax to create nests. People have been exploiting honeybees for almost 9,000 years. Scientists have examined over 6,000 pottery vessels, cave paintings and other evidence in order to determine when and where ancient people began harvesting honey and wax. Researchers suspect that bee products were used for food, religious ceremonies and early medicines. Today, the bee population is on the decline across the world due to loss of their habitat, exposure to pesticides and the effect of climate change.

The honeybee hive consists of a single queen, a few hundred drones and a thousand worker bees. The queen bee is the largest bee in the colony and is responsible for laying eggs. The queen’s stinger can be used multiple times and survive. The drone bees are the larger bees hanging around the outside of the hive. Their primary role is to mate with the queen. Once they have mated, the drones will die. The worker bees keep the hive functioning. These female bees are the smallest and they work endlessly to pollinate, process incoming nectar, feed the queen, feed the drones, cap the honey and nurture and feed larvae. Their long tongues are important to enable them to suck the nectar out of flowers.

The collection of nectar from flowers is brought into the hive where the bees consume, digest and regurgitate. This process creates honey which serves as stored food for the bees. For centuries, honey has been used for its’ health benefits. People use honey as a substitute for refined sugar. Honey contains important antioxidants including organic acids and phenolic compounds like flavonoids. These antioxidants have been linked to lower blood pressure. Honey leads to modest reductions in total and “bad” LDL cholesterol while raising “good” HDL cholesterol. Honey has been used to treat wounds and burns because of its antibacterial and anti-inflammatory effects. It also can be used as a cough suppressant that is natural and safe.

The De Carlini Mrs Bee Christmas Ornament sits upon a flower and sticks out her long worker bee tongue.

The De Carlini Mr Bee with Flower Christmas Ornament holds a flower with stem and wears a green scarf.

The De Carlini Graduation Bee Christmas Ornament is decorated with a graduates cap and classes while holding a pen.

The De Carlini Blue Bee Christmas Ornament is painted in a bright blue with gold bow.

The De Carlini Bee Chef with Pasta Ornament is decorated in a white chef’s hat, red neck tie and hold a plate of spaghetti with sauce. 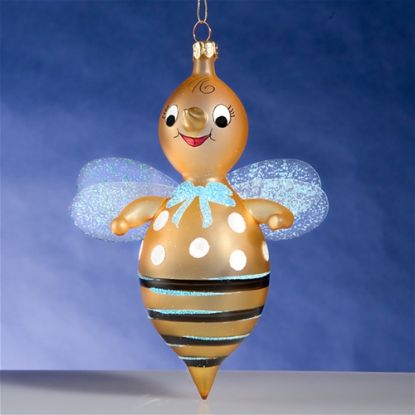 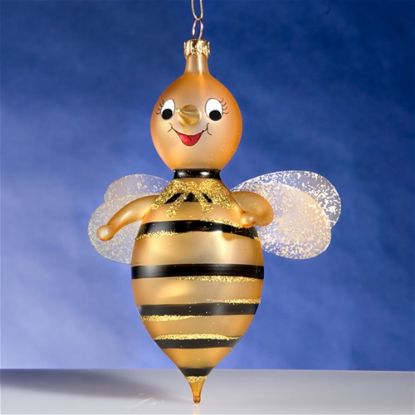 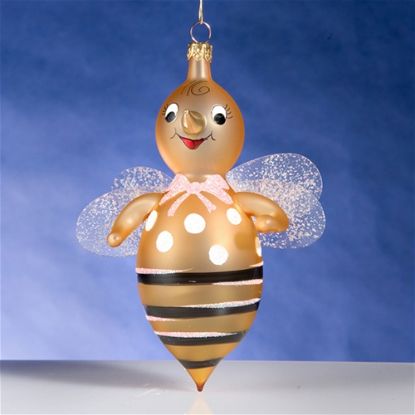 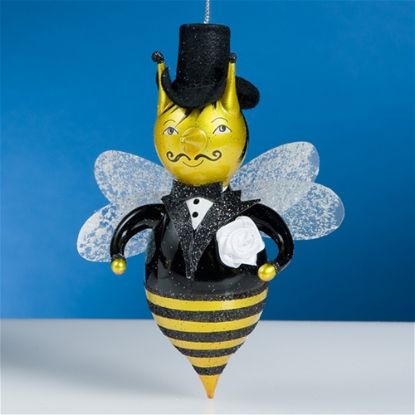 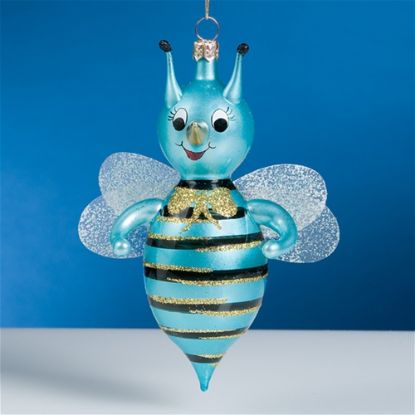 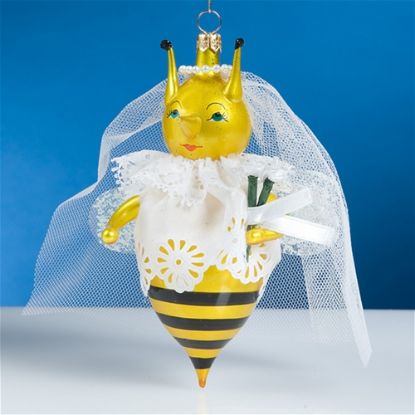 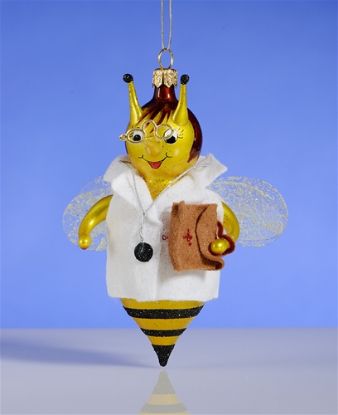 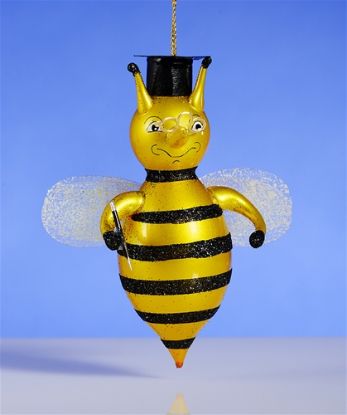 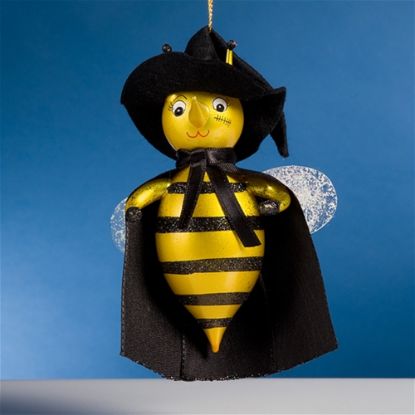 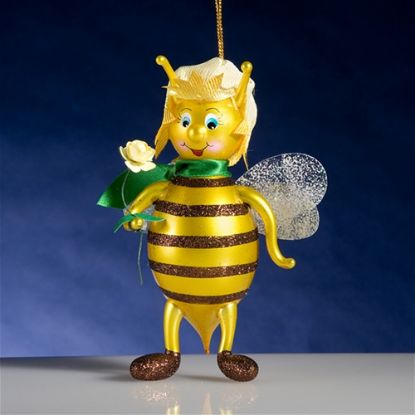 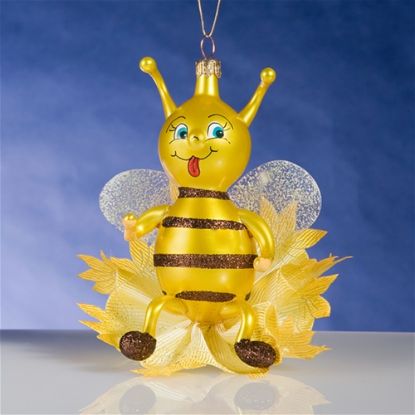 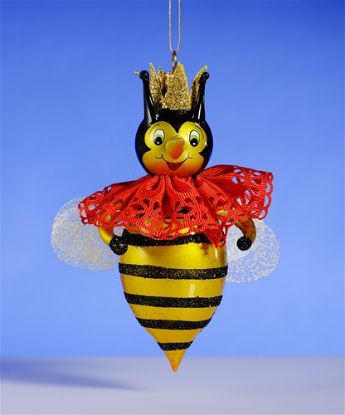