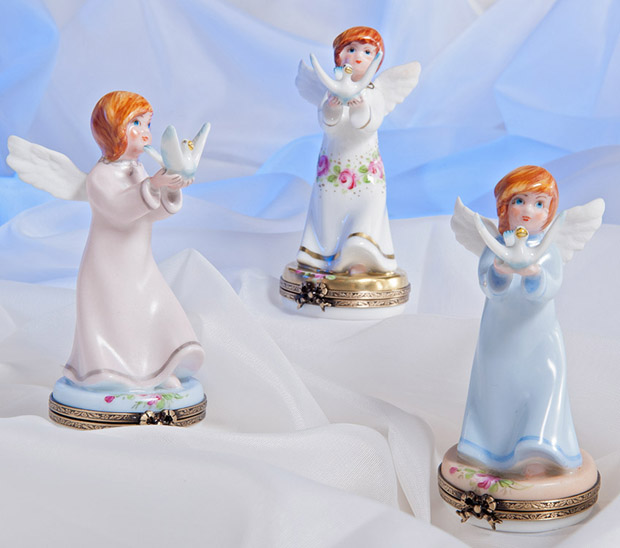 The Cottage Shop offers a variety of Limoges Angel Boxes. Throughout history, Angels have been depicted in religion and mythology. These benevolent spiritual beings mediate between the realm of the sacred and the temporal.  In Christianity, angels are God’s servants. The Bible depicts angels as messengers, protectors and harbringers news. Many people today believe in guardian angels who provide guidance in their lives and may even intercede on their behalf.

The Limoges Angel with Halo Box has blue, purple and pink flowers painted on a white base and has a crafted metal halo.

The Limoges Cherub in Pink Egg with Clouds Box is painted pink with white clouds and includes a small porcelain cherub inside.

The Limoges Guardian Angel Over Bridge Box has a painted scene with a little girl and boy crossing a wooden plank bridge and a guardian angel watching over them.

The Limoges Pink Dress Angel with a Dove Box is a beautiful piece and would make a great gift! This item has a flowy pink dress, blue base and holds a dove.

In Judaism, supernatural beings appear as angels with visions and prophesies in the Tanakh, and rabbinic literature. The Hebrew word for angel is mal’akh which means messenger. In the Torah, angels appear to Abraham. In Genesis, God and his angels appear to him in temporary human form. An angel also appears to Abraham and prevents him from slaughtering his son, Isaac. The Divine angel appeared to Moses in the burning bush. Moses is unable to extinguish the fire within him so he becomes empowered and returns to Egypt to take a stand. Angels are associated with visions and prophesies in biblical texts.

The Limoges Angel on Cloud Box has a gold painted flute, bright yellow and orange wings and sits atop of light blue base with gold stars.

The Limoges Statue of Angel Box is painted in royal blue with gold stars and has an angel sitting atop with small gold wings.

In Islam, celestial beings are created from light by God before the creation of humans. They have wings and are pure. Angels do not have free will. They are obedient and serve Allah always. In the Qur’an, Allah created the angels with wings so they can serve as messengers. The communicate messages to humans. Angels may appear in their heavenly form or in human form. They are seen as a vital part of Islam and believing in them is one of Islam’s 6 articles of faith. The Qur’an was revealed to the prophet Muhammad by the archangel Gabriel. Angels guard each person by the Command of Allah. According to the Qur’an, angels bring the wind and rain to Earth.

The Limoges Peace Angel in Gold Box is elegant and great for any collection! The wings are painted white with a hint of blue and they complement the light blue base.

In Norse mythology, there are land spirits, Valkyries and other helping spirits that assist Odin with his biding. In Greek mythology, the gods are much like angels. They are ethereal immortal beings that have appeared to mankind since the beginning of time. Angelos was a daughter of Zeus and Hera who became known as a chthonic deity. Angel is derived from the Greek word Angelos. In ancient Egypt, the neteru were divine forces that manifested itself in the creation cycle. In Indo-Iranian mythology, Mithra is the god of light which became an angelic mediator between heaven and earth. He was born beside a sacred stream under a sacred tree with a torch and knife. He killed the life-giving cosmic bull whose blood fertilized all vegetation.

The Limoges Cherub on Heart with Roses Box has a pink painted base with pink roses and green leaves.

The Limoges Holiday Angel with Open Wings Box has a gold painted base with green holly leaves and red berries. 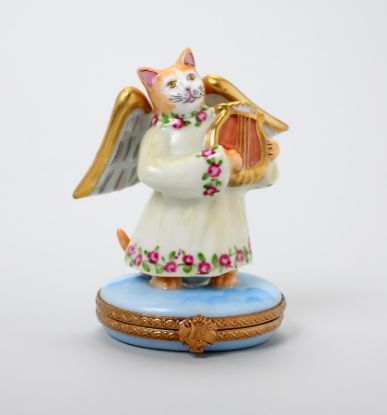 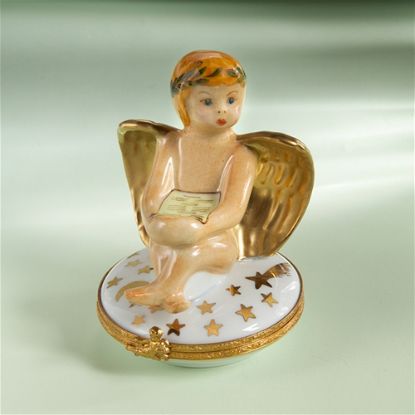 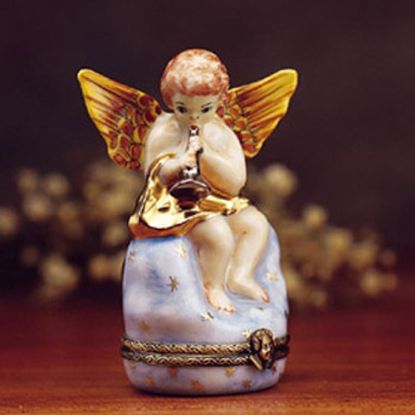 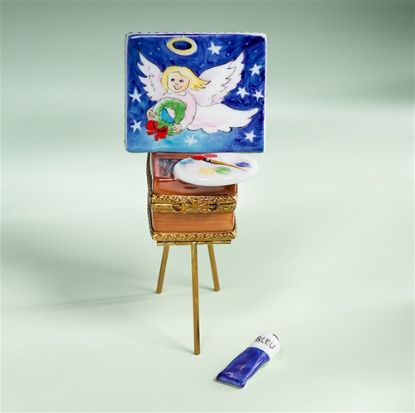 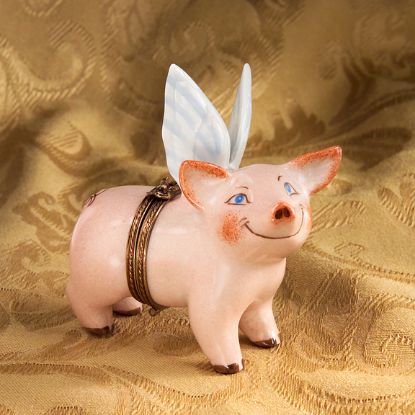 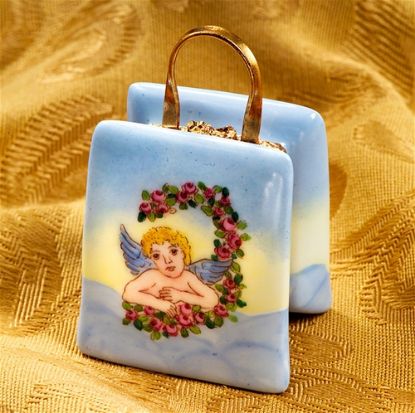 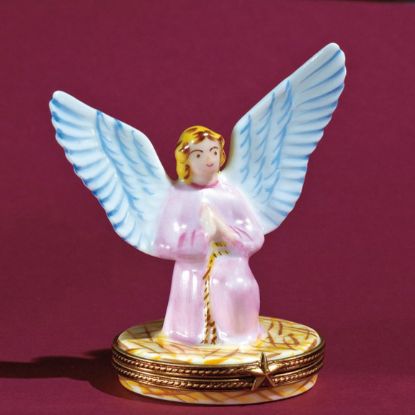 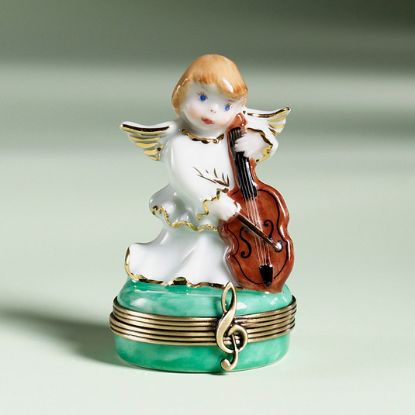 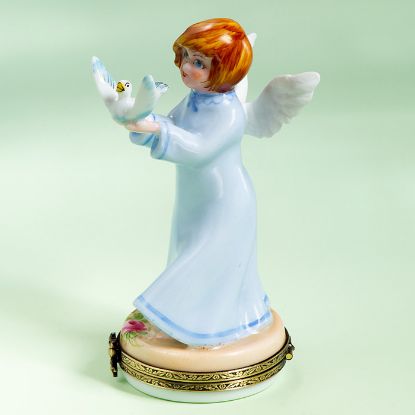 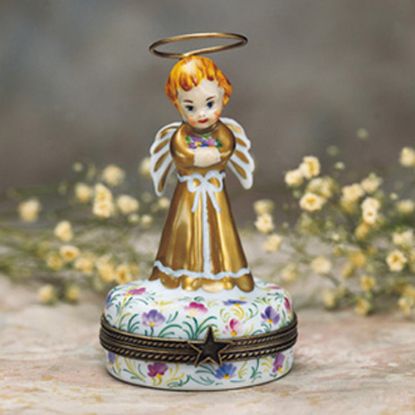 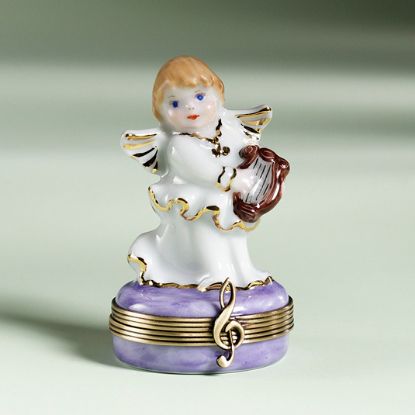 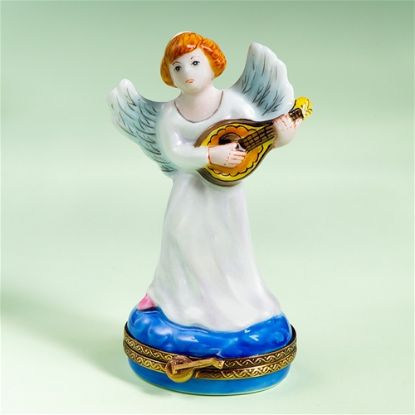 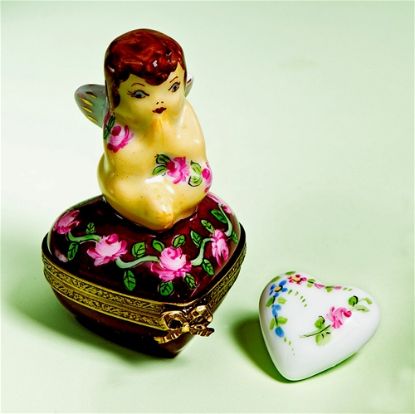 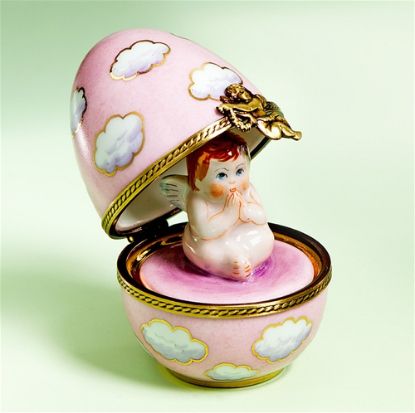 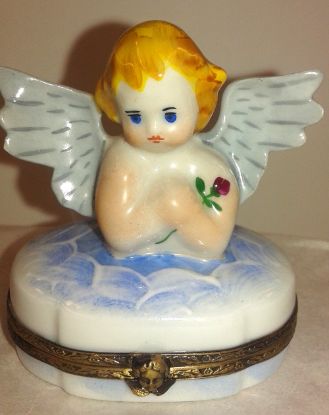 Limoges Cherub in the Clouds with a Rose Box 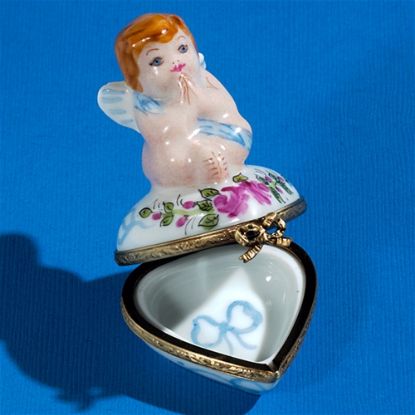 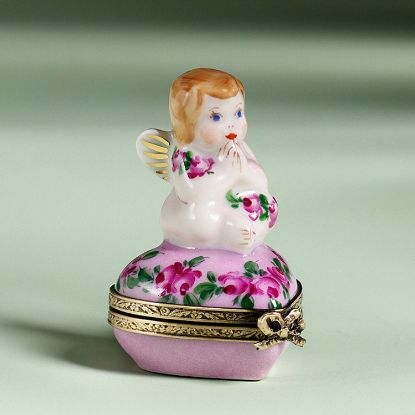 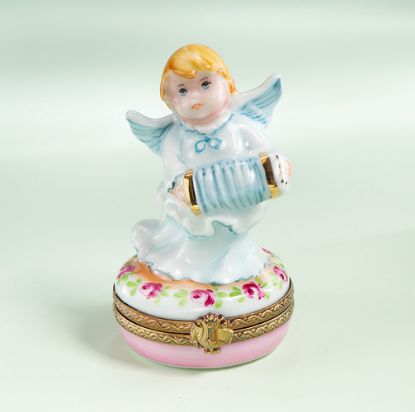 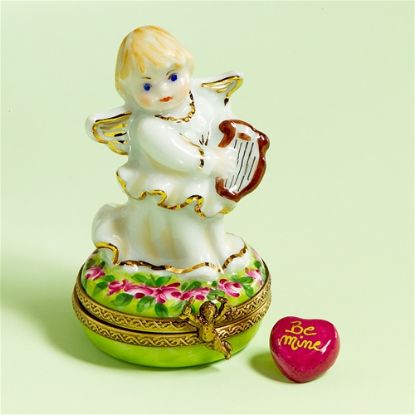 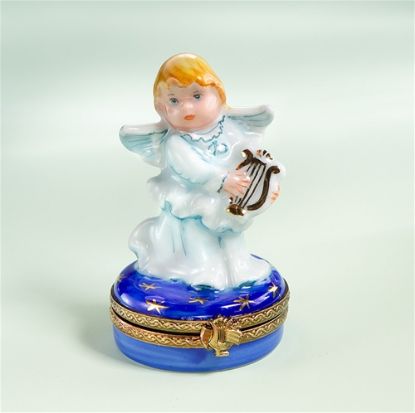 Limoges Cherub with Lire on Blue Base Box 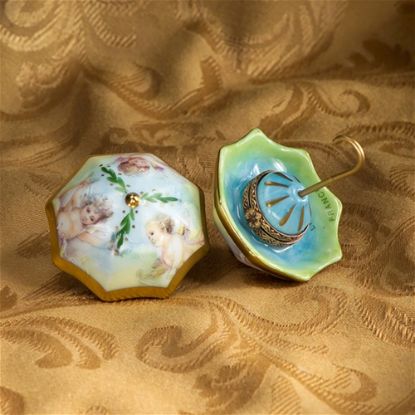 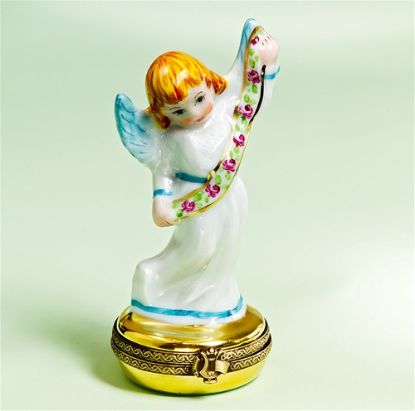 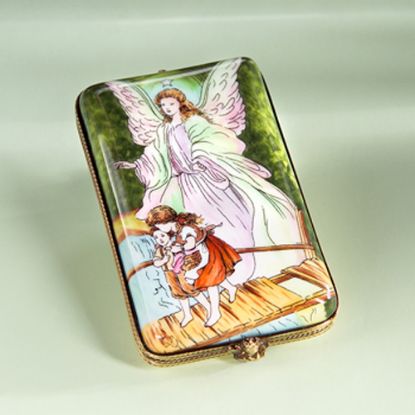