The Cottage Shop offers a variety of Limoges Shoe Boxes. Each are uniquely crafted and decorated to showcase the evolving style across the centuries.

The earliest known shoes were invented about 40,000 years ago by the archaic humans during the Middle Paleolithic period. Archaeologists and paleoanthropologists have found evidence of partial moccasin-like coverings and rock sandals with twisted fiber twine. The Ancient Egyptians only wore sandals for special occasions. The poor wore sandals made out of woven papyrus or palm and the rich wore sandals made of leather. The Ancient Greeks wore a sandal with multiple straps and the top usually had a colored leather. The development of footwear was important to the growth of Roman Civilization. They adapted the hobnailed footwear from the Etruscans to use for armies traveling rough terrains. The campagus was a low boot worn by military officers and was heavily tooled with ornamental insignia according to rank. The Roman Gladiator sandal was made from thick leather and was used as protective armor. By the 4th century AD, enclosed boots called gallicae were adapted from Gaul. These items were between a sandal and a shoe and were worn during bad weather.

The Limoges Pink Sandal with Sunglasses Box is painted with fleur de lis and crown designs with a metal strap encrusted with jewels.

The Limoges Beach Sandal with Palm Tree Box has a beach scene painted on the top and includes a loose shell.

The Limoges Pink and Green Sandals Box has purple roses painted on the base with green and pink strappy sandals with a matching purse on top.

The Limoges Mule Shoe with Shoe Box is painted in purple and blue feathers and has an open back shoe with a purple ruffle flower on top. This item also includes a loose porcelain mule shoe.

During the Medieval era, wooden clogs were worn to protect feet in Holland. These were popular among farming villages. In the 16th to the 19th centuries, sabots were worn by peasants in France and other parts of Europe. One style was made from a hollowed single piece of wood and the other was a heavy leather shoe with a wooden sole.

The Limoges Dutch Clog with Tulips Box is painted with blue delftware designs and has an orange and pink tulip on top.

In the 17th century, boots were fashionable for men and were worn at court during the reign of King Charles I. When Charles was an infant, he suffered from Osteomalacia and learned to walk wearing calipers. The Royal shoemaker created boots to conceal the calipers. As an adult, he was able to walk without calipers but still preferred to wear boots.

The Limoges Elegant Brown Boot Box has painted lace up the length of the boot and has a beautifully crafted bow clasp.

In 1599, Abbas I sent the first Persian diplomatic mission to Europe and the interest in all things Persian spread. The Persian style shoes were happily adopted by the European aristocrats. In the early Baroque period in Europe was the beginning of modern footwear. Fashions and materials differed between social classes. Commoners wore heavy black leather heels but the aristocrats’ shoes were crafted out of wood. Both women and men wore heals. During the reign of King Louis XIV, only those who wore red colored heels would be granted access to his court. Louis XIV always had his heels and soles dyed red. When the fashion of heels spread to the lower ranks of society, aristocrats increased the height of their shoes. This was the beginning of high heel shoes.

The Limoges Pink Roses Shoe Box with Shoes is painted with pink roses with green leaves and a shoe clasp. This box includes two loose porcelain shoes that match the box.

The Limoges Purple Shoes Lily of the Valley Shoes on Oval Box has a purple painted base with lily of the valley flowers and pink flowers painted on it with matching high heel shoes on top.

The Limoges Paris Book with Red Shoes Box has a painted Paris scene with the Eiffel tower with red high heel shoes on top. 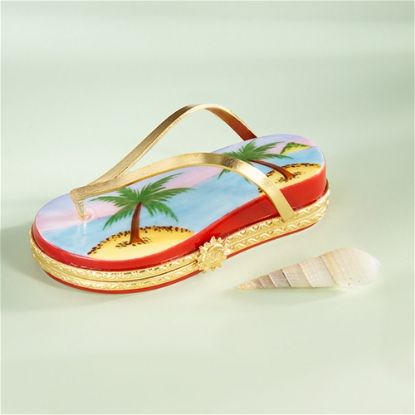 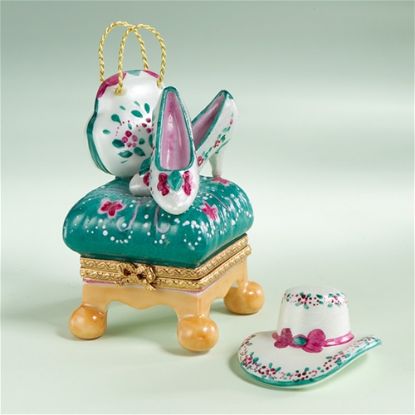 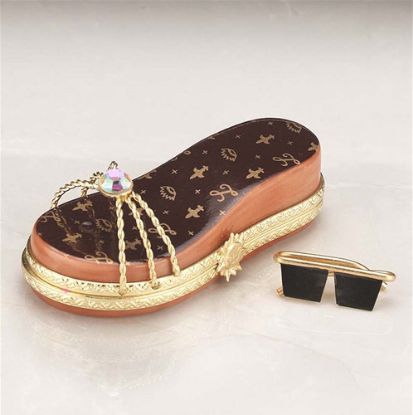 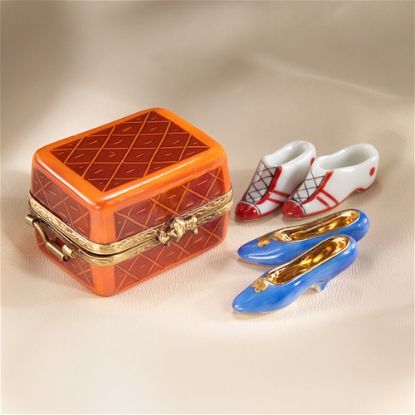 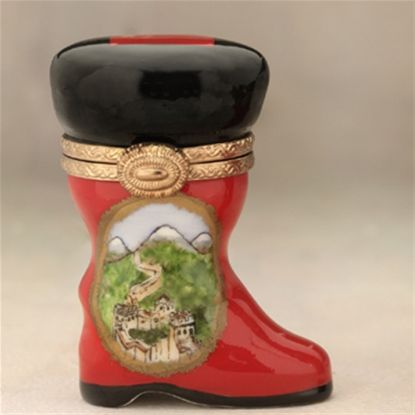 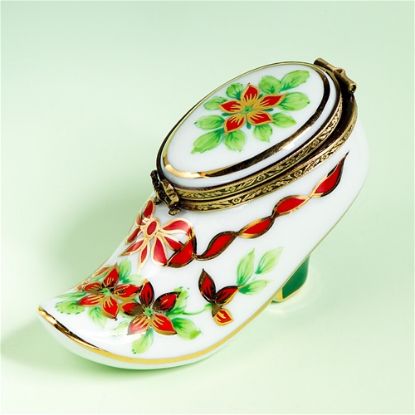 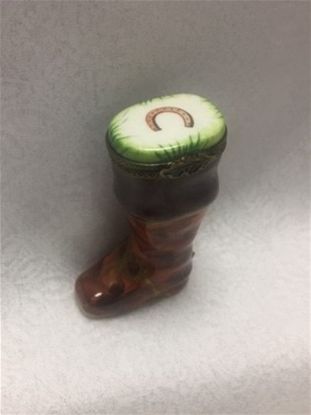 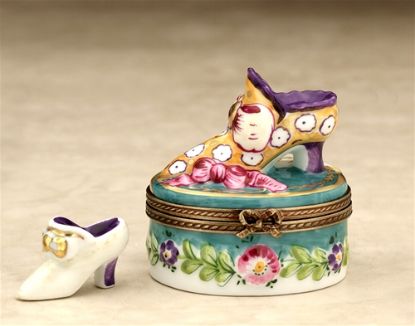 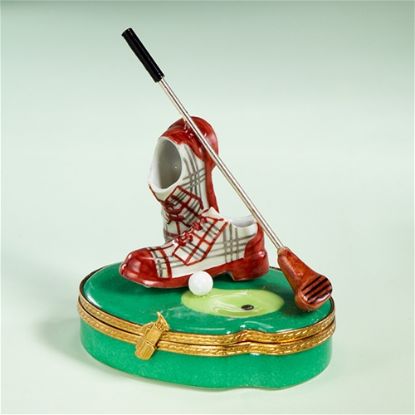 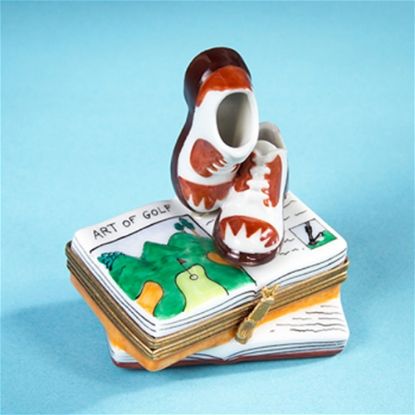 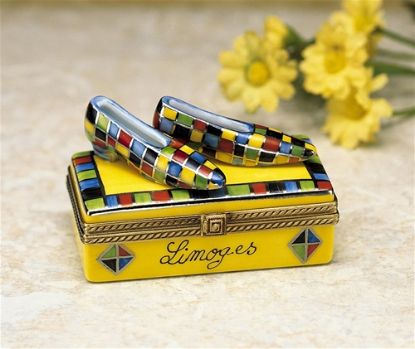 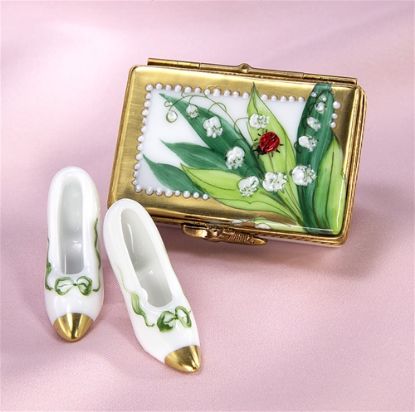 Limoges Lily of the Valley Shoes Box with Shoes 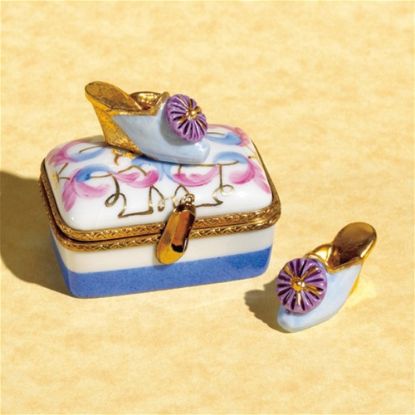 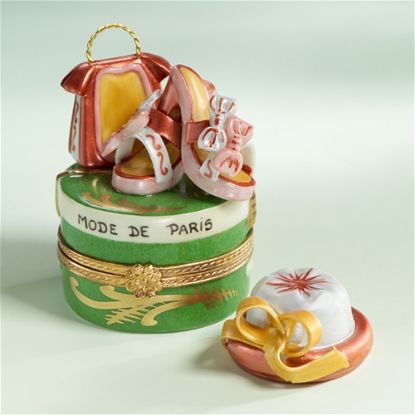 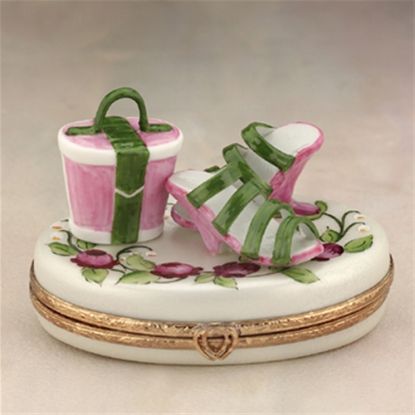 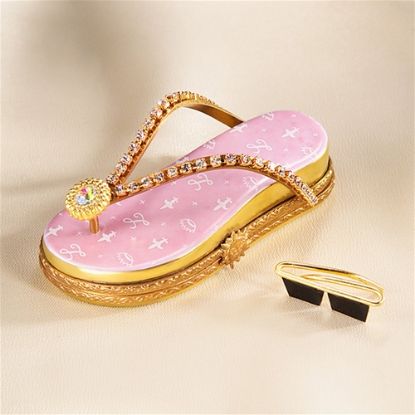 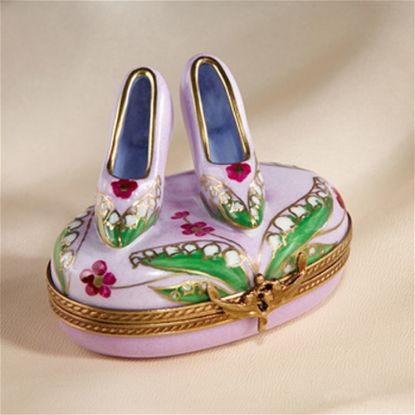 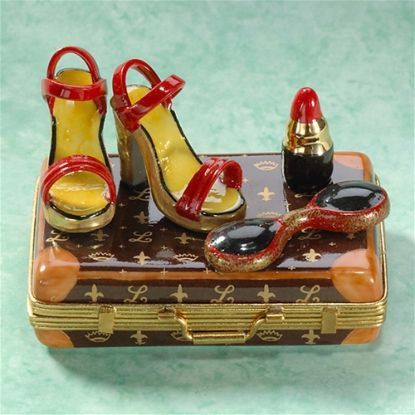 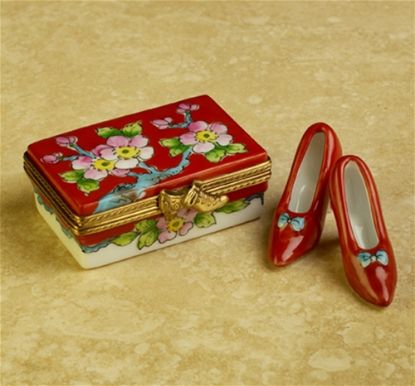