Fragrant products such as perfumes and essential oils have been enjoyed for centuries. The Ancient Egyptians were among the first to incorporate perfume into their culture. They believe perfume pleased their gods and used them in religious ceremonies. They also understood the positive effect it had on health and even invented glass bottles to contain it. They captured fragrances in fat, cold maceration and hot decoction. Recipes and depictions of the preparation of perfume have been found in temples all over Egypt. The Egyptian god, Nefertem, is considered the god of perfume and aromatherapy who emerged from the primaeval waters as a lotus flower at the beginning of time. In mythology, he is known to have eased the suffering of the aging sun god Re with a bouquet of sacred lotus.

Following the Egyptians, perfume was used by the Ancient Chinese, Hindus, Israelites, Carthaginians, Arabs, Greeks and the Romans. Early texts from the Indus civilization mentioned essential oils that they derived from botanical plants and is known to be one of the earliest to distill. Chemists in Persia and Arabia helped organize the production and spread it globally. Islamic cultures perfected the extraction of fragrances through steam distillation and introducing raw material. During the Dark Ages, there was a decline in the use of perfume as Christianity rose. The Muslims kept the tradition of perfume alive during this time and assisted with its revival with international trade.

Beginning in the 14th century, France started growing aromatic plants for the perfume industry. During the reign of Louis XV, perfumes were used on everything including furniture and clothing. It was even used as a substitute for soap and water. France quickly became the center of perfume manufacture in Europe. In 1910, French jeweler Rene Lalique established a glass factory at Combs-la-Ville where he developed perfume bottles in a molded style. His reputation was greatly enhanced when his designs were shown at the Paris Exhibition in 1925. Lalique glass was the height of fashion in the 1920’s and are still sought out by collectors today.

In the 20th century, clothing designers started producing their own lines of perfume. Celebrities have been used to market perfumes for other brands and for perfumes with their own names on them.

The Cottage Shop offers a variety of Limoges Perfume Boxes. As part of our museum collection, the Limoges Yellow Perfume Chest with Roses Box is painted with gold accented roses and a refillable glass perfume bottle inserted inside. This piece stands 3 inches tall and will brighten up any traditional collection!

The Limoges Iris Chest Box with Perfume Bottles is painted in purple with yellow hues and leaves that are painted different shades of green. With its uniqueness and beauty, Irises have rich meanings and are given as gifts for several reasons.

The Limoges Two Birds Box with Perfume Bottle has two birds surrounded by a garland of 3D pink roses a top of a brass laced cage and has colorful feathers painted on the porcelain base. 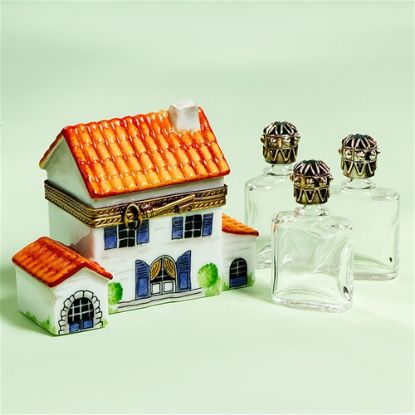 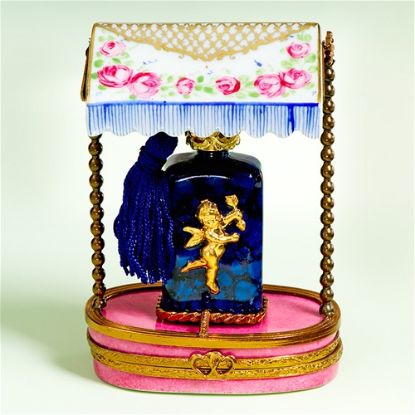 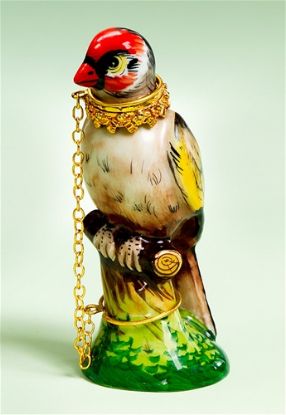 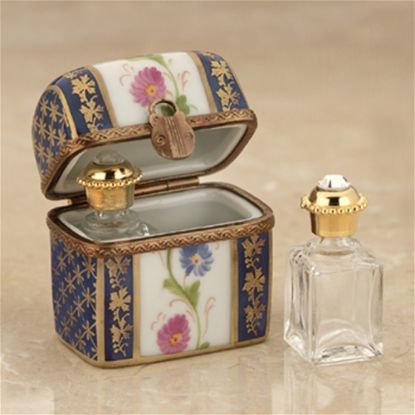 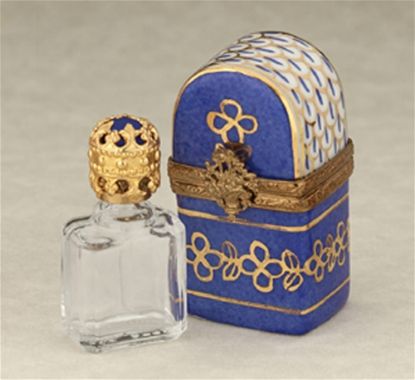 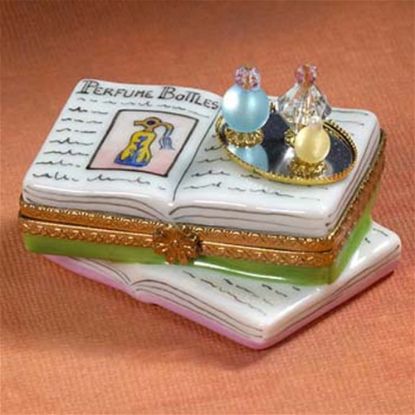 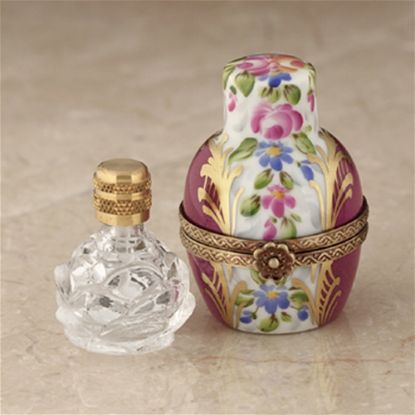 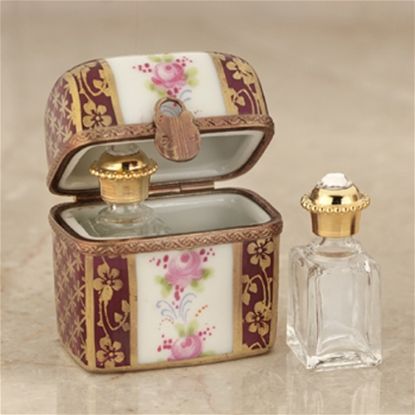 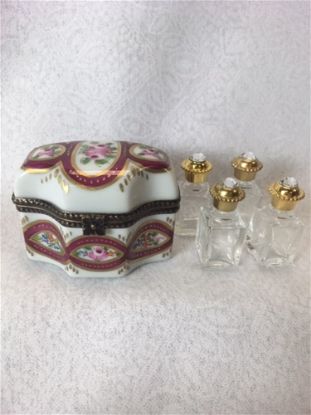 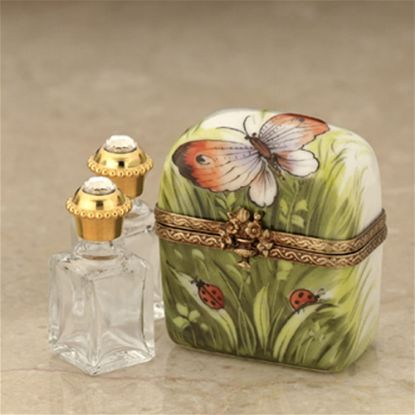 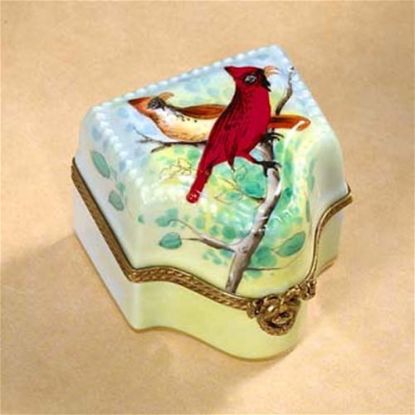 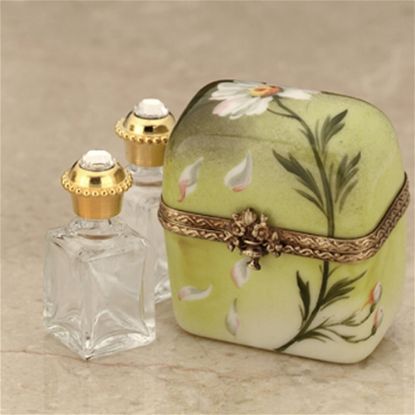 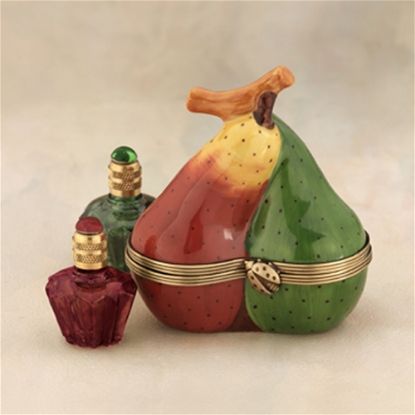 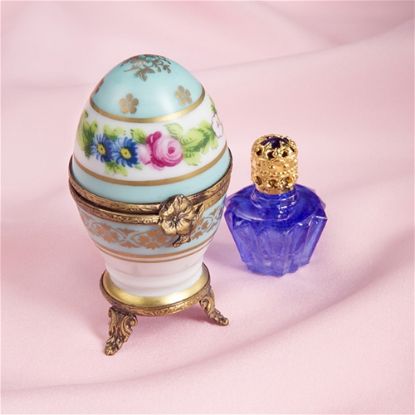 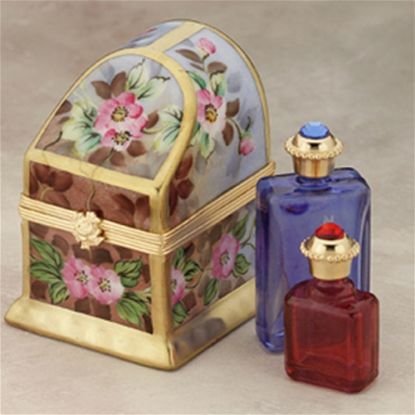 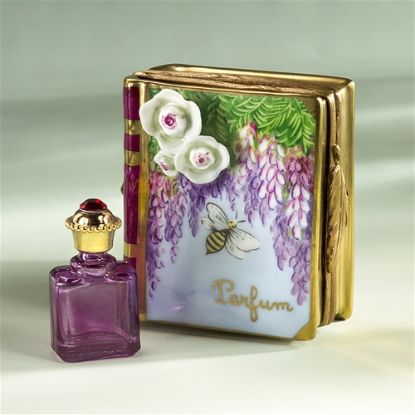 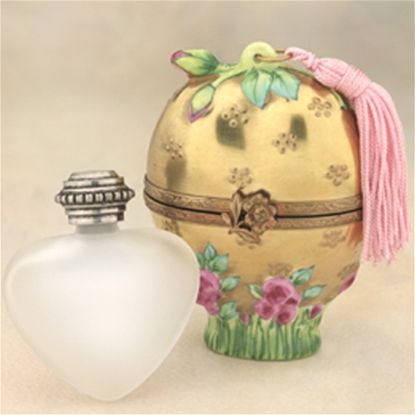 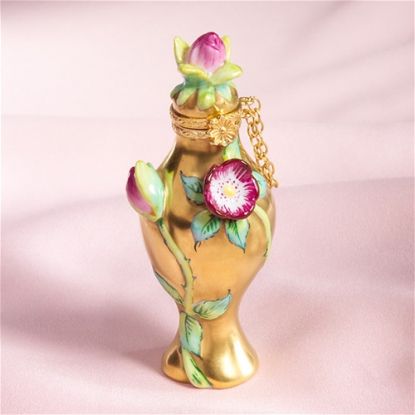 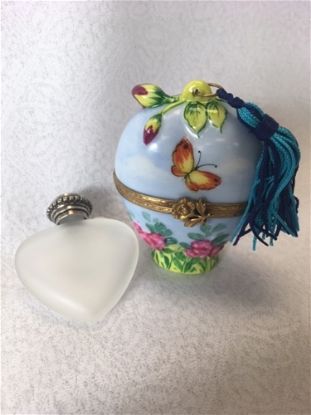