Whether it’s New Year’s Eve, a wedding or another celebration, we enjoy pairing these events with a glass of champagne. This white sparkling wine has been regarded as a symbol of luxury with a rooted history in the Champagne region of France. In as early as the 15th century, bubbles in wine were a sign that it continued to ferment inside the bottle. For centuries of viniculture history, this indicated that it was no longer good. In the 1600s, bubbly wine started to be produced and desired from Champagne. Due to early frosts in this region, the fermentation process was left incomplete. When the warm weather appeared in the following spring, a portion of the wine would sparkle. This fizzy wine was so popular among the wealthy in Georgian England that barrels were shipped across the channel and bottled there. English coal-fire glassworks produced stronger bottles and by 1740, molding techniques allowed the production of standardized bottles and corks that could contain the fizzy wine. The bottle fermentation process created clouds of dead yeast. Attempts to remove the yeast during manufacturing wasted a lot of fizz. In 1815, Champagne producer Widow Cliquot turned the bottles upside down to allow the yeast to settle in the neck. The bottleneck was then submerged into icy brine in order to freeze the yeast. The frozen yeast plug would then be removed before the remaining clear champagne was sweetened and re-corked. After several years of chemistry and biology experiments, Europeans began to understand the inner workings of the fermentation process. In 1860, Louis Pasteur explained how yeast was at the center of this process. During the reign of Louis XV, renowned Champagne houses were established such as Ruinart, Moet & Chandon, and Louis Roederer. In 1812, Napoleon’s march on Moscow secured popularity of Champagne among the upper classes in Russia. In 1876, Louis Roederer created Cristal Champagne for Tsar Alexander II because he demanded a clear bottle in order to see anything dangerous hidden inside. Champagne has been woven into French culture by mass marketing between 1871 and 1914. In 1900 alone, 30 million bottles were shipped. With the rising demand, winemakers began making bubbly with grapes from other regions and countries. Traditional producers in the Champagne region wanted their brand to remain undiluted. In 1936, Champagne’s Appellation d’origins Controlee was established by French law to regulate all aspects of the production process. Champagne bottlers have issued commemorative labels while special vintages have been offered for every life celebration imaginable. Champagne has also been a part of holiday advertising campaigns. Champagne-like sparkling wines continue to be made outside of the Champagne region and each one has their own unique style and following.

The Limoges Champagne in Case Box is classically designed after Moet & Chandon’s iconic champagne. Founded in 1743, Moet & Chandon has produced a range of unique champagnes for every occasion.

The Limoges Champagne in Decorated Bucket Box has painted red and white grape vines around the top and a crafted bundle of grapes clasp.

The Limoges Champagne with Brie and Foie Gras Box has a combination of porcelain delicacies that fit nestled in an open top and a painted gold vine with yellow leaves wrapped around it.

The Limoges Champagne Case with Hearts Box is romantic and unique with a porcelain gold bow. Two champagne flutes and bottle are enclosed inside.

The Limoges Champagne Cork Box is designed with a mushroom shape. Champagne corks start out in an extra wide cylindrical shape and are squished into the bottles firmly. Since the cork only goes in about two-thirds of the way, the pressure creates the mushroom shape. 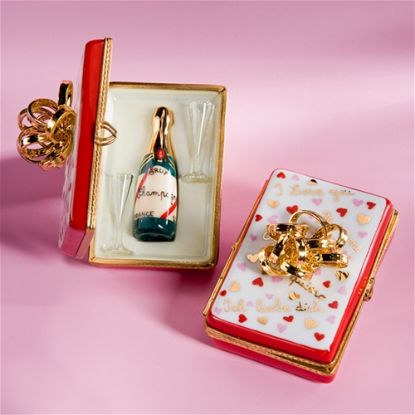 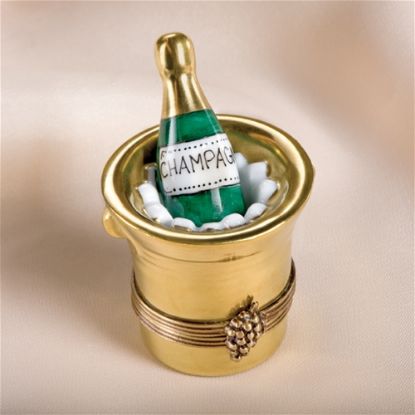 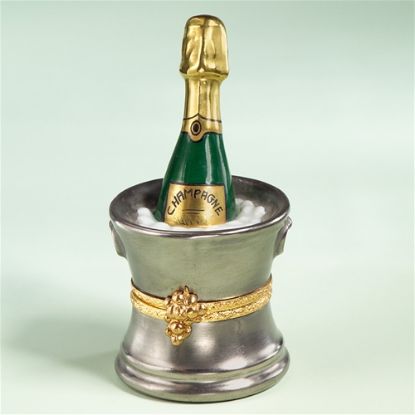