The Cottage Shop offers a variety of Limoges Casino and Games Boxes. Gambling has a long history and the origin is difficult to pin down. For as long as there is documented history about civilizations, there have been signs of people gathered and gambling was most likely taking place. In ancient China, games of chance became popular when the Xia and Shang dynasties were thriving. During the Han Dynasty, the lottery-like game, Keno, was the game of choice. In Ancient Rome and Greece, all forms of gambling were enjoyed by its people. In the city of Rome, gambling was forbidden and a penalty was imposed on those who were caught. The penalty was worth 4 times the stake being bet so the citizens invented gambling chips. If they were caught gambling, they would claim to be playing only with chips and not for real money.

The Limoges Mah Jongg Game Box has painted tiles on the inside of the box and includes porcelain dice.

Dice games are also one of the oldest known to man. There are many conflicting theories as to the origin. The playwright Sophocles reported that dice were invented by Palamedes during the siege of Troy. The historian Herodotus reported that dice were invented by the Lydians. Archaeological finds have shown that dice were used in many earlier societies. Excavations in China revealed dice from 600 BCE. Dice dating from 2000 BCE were also found in Egyptian tombs. Early dice were made out of knucklebones and anklebones. In Greek and Roman times, most dice were made from ivory or bone but some were made from onyx, agate, bronze, porcelain or other materials.

The Limoges Dice Box with Dice is painted green and gold with dice on the top and includes 3 dice that fit inside.

The Limoges Dice Box with Dice is painted with over lapping playing cards around the base and includes 3 dice.

One of the oldest and most popular board games is chess. Chess is a game of strategy and it first appeared in India, where it was called Chaturanga, around the 6th century AD. By the 10th century, chess spread from Asia to the Middle East and Europe. The game was popular among nobility because it provided an intellectual diversion. The rules and game design evolved over time until the early 19th century. The chess standards of today reached popularity in the 20th century. Professional and state-sponsored chess players competed in world championships for prizes. Today, players of all ages play chess online, in organized tournaments or just play as a favorite pass time.

Playing cards have been used for a variety of games for centuries. Playing cards originated in ancient China. Early Chinese literature from the 10th century refers to playing cards but does not indicate any specifics. The first European playing cards appeared in the 1370s by merchants and were hand painted. They were a luxury item for the rich. During the 15th century, playing cards were a favorite pastime for the wealthy. Wood-block printing in Germany reduced the cost of playing cards in the early 15th century. Production costs also reduced when France started painting with stencils in the 1480s. This resulted in the design of suit marks and the popularity spread worldwide. Playing cards become more associated with gambling. In the 17th century, gambling houses first appeared in Italy. In 1638, the Ridotto was established to provide a controlled gambling environment. In the 17th century, King Louis XIV’s finance minister fed the royal purse by turning the Palace of Versailles into one large card-playing casino. In 1856, Prince Charles III of Monaco granted permission to allow a joint stock company to open a casino. In 1861, the Monte-Carlo casino opened.

The Limoges Card Table Box is a nice display of traditional card games.

The Limoges Court Jester Box is painted with the 4 playing card suits and would make a fun item for your collection!

The Limoges Queen of Hearts Card Box is beautifully painted with a mirrored image of the queen of heart.

Slot Machines are popular gambling devices found in all casinos today. The first modern day slot machine was invented in 1894 by inventor Charles August Fey. This gambling machine was coin-operated. In 1895, he built the 4-11-44 which proved to be a success at a local saloon. He quit his job as a mechanic and opened up a factory. In 1898, he built the first three-reel slot machine that automatically paid out cash. This model had a handle that set the reels in motion. The reels had playing card suit marks that lined up to form poker hands. In 1899, he created the Liberty Bell slot machine which used horseshoes and bells on the reels. When the bells lined up, the machine paid its top payout. This machine became very popular among the saloons in San Francisco. Competitors all over quickly copied this machine. In 1909, due to morality and law, San Francisco banned slot machines in the city. Fey and his competitors started building machines without the coin slots. The payout turned into drinks or cigars and they were dispensed across the saloon counters. In 1909, the Industry Novelty Company created machines with various fruits on reels. The company called their machines chewing gum dispensers in order to work around the legal restrictions. These machines became popular. In 1916, the Mills Novelty Company invented the “jackpot” where a certain combination of symbols would dispense all of the coins in the machine. Over the next several decades, laws and restrictions to govern slot machines changed. After World War II, governments were drawn to the idea of collecting tax revenue and the slot machines became popular worldwide. After a 50 year ban in France, slot machines were allowed in French casinos. In 1933, France legalized casinos and it is now home to many of Europe’s most famous. Nearly every country in Europe changed their laws in order to permit casinos. In 1931, Nevada legalized gambling and was home to the first legal casinos in the US. In 1978, casino gambling was introduced in Atlantic City, New Jersey. Starting in the 1980s, casinos began appearing on various American Indian reservations which are not subject to state antigambling laws. Many additional states amended their laws to permit casinos in the 80s and 90s. There are more than 3,000 legal casinos and gaming houses in the world.

The Limoges Slot Machine Box has the fun details of the traditional slot machine! This would make a great gift or the perfect addition to any collection!

The Limoges Monte Carlo Monaco Casino Postcard Box has a detailed painting of the casino and includes a porcelain ace of hearts.

The Limoges Casino On a Roll Box is designed with a royal flush heart suit poker hand, a pair of dice and Las Vegas on the top. This would make a great item to remember your trip to sin city! 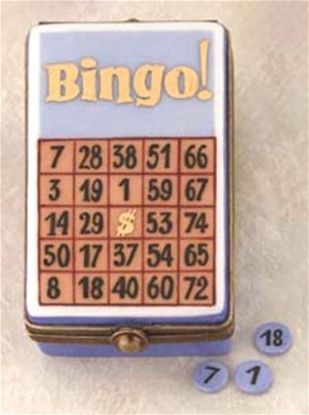 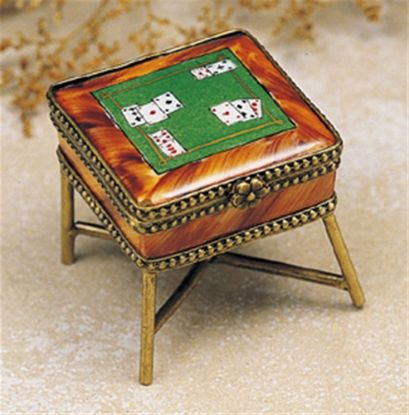 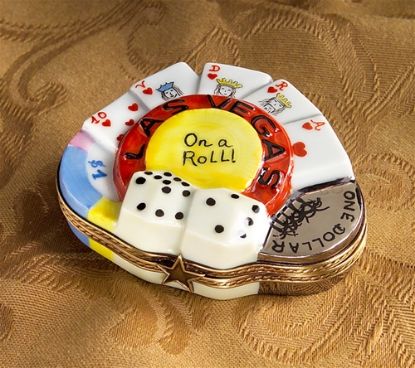 Limoges Casino On a Roll Box 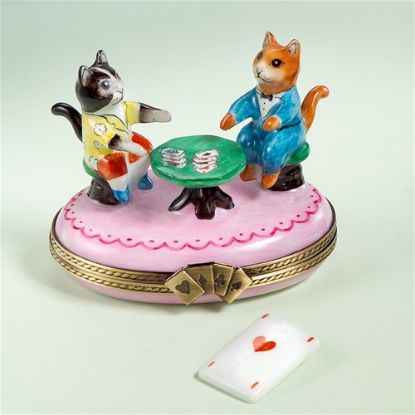 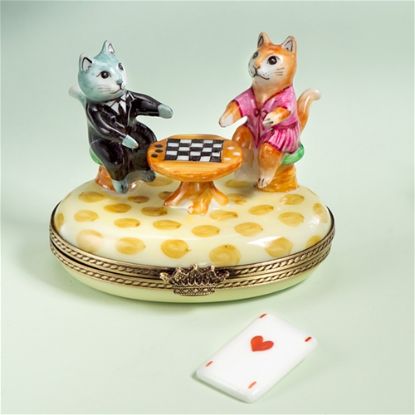 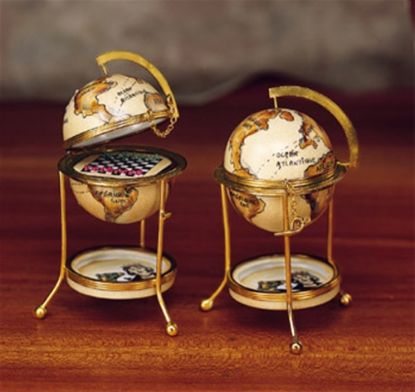 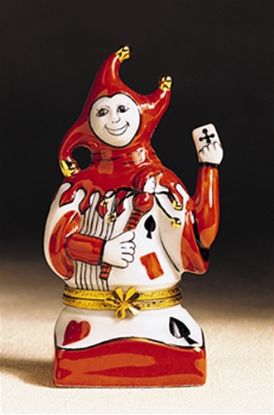 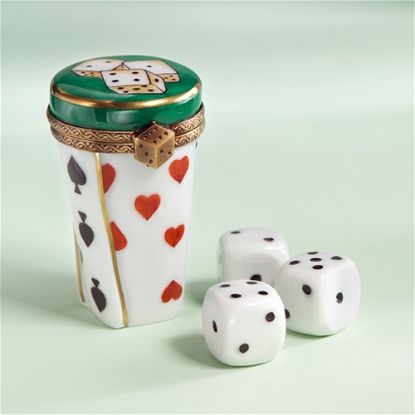 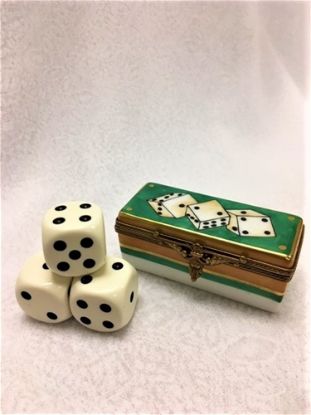 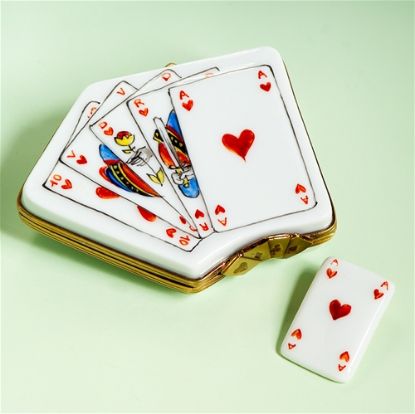 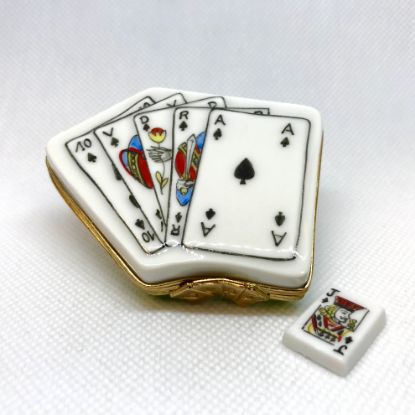 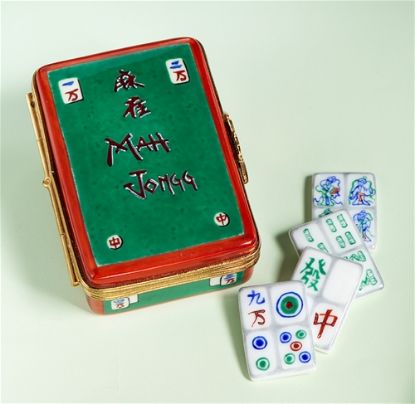 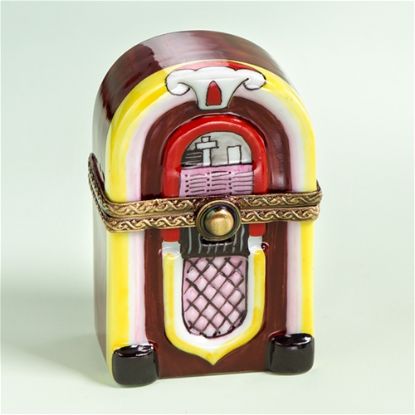 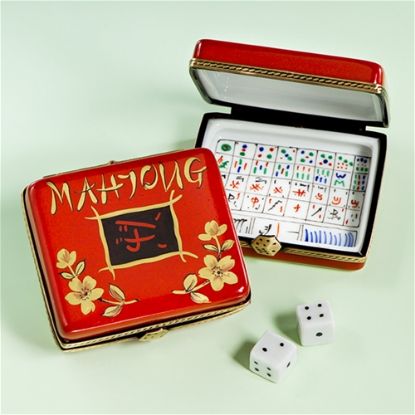 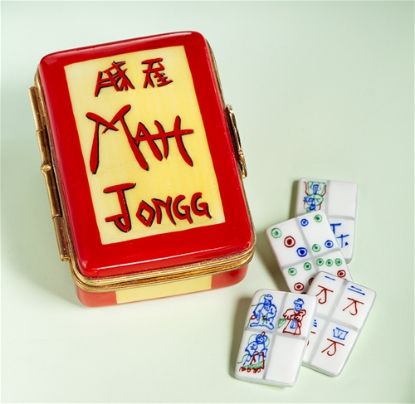 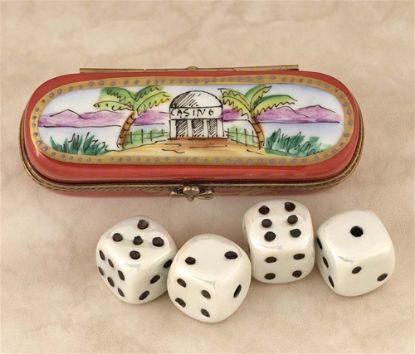 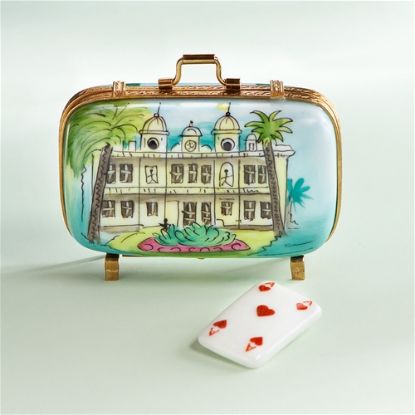 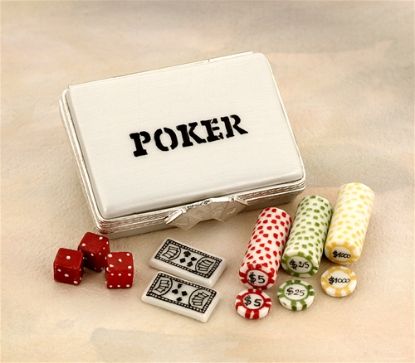 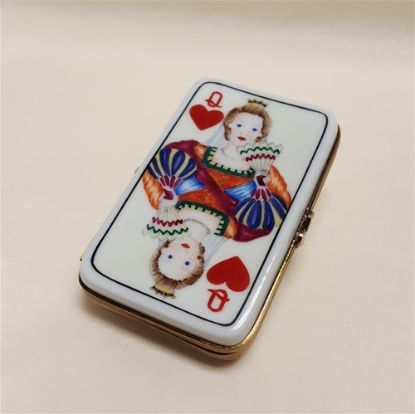 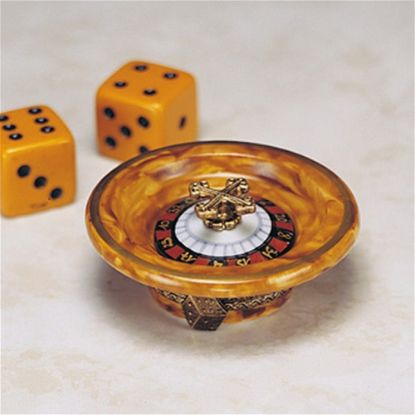 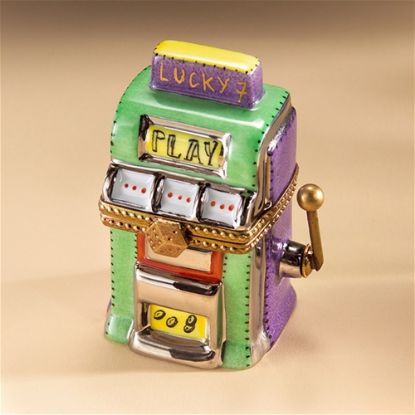