The Cottage Shop offers a variety of Limoges Teapot Boxes and Limoges Tea Serves. Tea has been a fan favorite for centuries. It is produced by steeping young leaves and buds from a tea plant in boiling water. The plant species Camellia Sinensis is valued for this. The two main varieties of tea are the small-leaved plant and the large-leaved plant. People have also grown hybrids of these two varieties.

There have been legends and myths about the origin and circulation of tea over the centuries. Some legends say that over 5,000 years ago, a single leaf blew in Chinese Emperor Shen Nung’s pot of boiling water. He found that the leaf improved the taste of the water but it also seemed to have a stimulating effect on his body. Another Chinese legend states that the Goddess of Mercy, Kuan Yin, presented tea to a devout farmer who maintained her temple. The iron statue of the goddess inside the temple came alive and told the farmer to care for the plant outside and it will be the key to his future. The farmer took much care of the withered plant and it flourished. He experimented and dried the leaves in a stone wok. The leaves turned black and the nectar was fragrant like the finest blossoms. The farmer drank it and said it was the most delicious drink that’s ever touched his lips. In Indian mythology, Buddha took a vow to meditate without rest for 9 years. After some time, he dozed off. When he woke up, he tore his eyelids off and threw them to the ground. His eyelids took root and sprout leaves. Buddha then chewed the plant and his tiredness vanished. That plant is known as the first tea plant.

Tea has been known in China since around 2700 BCE. Tea was used as a medicinal beverage.  At around the 3rd century CE, tea became a regular beverage. In 350 CE, methods for planting, processing and drinking tea were published. In 800 CE, tea was brought to Japan by a Buddhist monk and cultivation was established by the 13th century. From there, tea cultivation was brought to other surrounding areas by China and Japan. In the early 17th century, the East India Company brought tea to Britain. Tea was consumed as a medicine for invigorating the body and keeping the spleen obstruction free. In 1662 when Catherine of Braganza arrived in England to marry King Charles II, she brought her love of tea. Catherine carried a sipping tea as part of her daily routine. Tea was expensive and seen as a luxury item. Tea became associated with high society and for the elite women around the royal court. Everyone began imitating the habits of the queen. Gradually by the end of the 17th century, even the aristocrats started sipping small amounts of tea.

The Limoges Breakfast Cart with Croissants Box is elegantly painted with pink roses and pink plaid design with two porcelain tea cups atop.

England didn’t know much about tea so they followed the customs of china. They imported small porcelain tea bowls, saucers, sugar dishes and teapots. British estates started growing tea and London became the center of tea trade. In the 18th century, France and England started producing porcelain using powered glass. England would frequently add ash from charred bones which began the tradition of bone china. The powdered glass porcelain is known as soft-paste porcelain and is much finer than true porcelain. True porcelain contains kaolin and petuntse. Koalin is very fine clay and petuntse is a rock which fuses at high temperatures to form glass. During the Han Dynasty, China first introduced the first porcelain tea ware. In northern China, white porcelain was used and in southern China, light blue porcelain. During the Song Dynasty, the famous Yixing teapot was created from iron ore. Chinese residence began crafting ceramic teapots and matching bowls with customized patterns and colors. The bowls associated with tea were used to hold different tea leaves. By the late 19th and early 20th centuries, tea production spread across non-Asian countries and so did the development of tea sets along with the various sugar and creamer bowls we see today.

The Limoges Oriental Man with Fish Gold Tea Jar Box is painted in the traditional white with blue pigment. This item is a striking cultural box for your collection!

The Limoges Burgundy Sevres Teapot and Cup Saucer Boxes are painted in roses accompanied by burgundy and gold stripes. The Sevres porcelain factory was founded in 1756 and quickly became the leading porcelain factory in Europe.

The Limoges Elephant Teapot with Gold Man Box is the perfect cultural piece with the gold Buddha atop of this sacred elephant teapot painted with pink waterlilies!

The Limoges Green Oriental Teapot with Dragon Box is a celebration of strength and power. The dragon is an important symbol in East Asian culture and this item will be a welcomed addition to any collection!

The Limoges Green Leaves Bamboo Oriental Teapot Box is creatively designed with a porcelain bamboo handle. Bamboos were used for early construction of houses in China, are a staple food for giant pandas and have medicinal uses.

Today, tea traditions and ceremonies are still acknowledged. In China, Cha Dao is a supreme concept in Chinese philosophy which stands at the heart of their tea culture. In Japan, the tea ceremony is a time honored institution with rooted Zen Buddhism principles and is an aesthetic way of welcoming guests. This ritual contains a green powdered tea called matcha that is prepared by a skilled practitioner and served to a small group. In Morocco, green tea with mint is a tradition of hospitality and it is Moroccan etiquette to offer it to any visitor. The tea is served in a highly ornate teapot often engraved in silver and crystal glasses.  In England, afternoon tea is a fashionable social event comprised of a variety of tea blends, tiers of sandwiches, cakes and scones. The 7th Duchess of Bedford, Anna, is credited for the origin of the afternoon tea. In the early 1800s, lunch was served at noon and dinner was put off until the evening. Anna would often suffer from in between-meal hunger so she decided to have a light meal over tea in the late afternoon. Since Anna was part of high society, this trend took off among her peers and proved to be an excellent social venue. In Russia, samovar produces different sounds when boiled and the people believe the spirits are communicating and tea drinking creates an atmosphere for heart-felt conversation. In Tibet, butter tea is surrounded by friendly conversations and local hospitality. In Iran, tea is drunk at every occasion through the day and Teahouses are popular meeting places. In Argentina, yerba mate is an ancient custom of drinking this herb in a gourd while socializing. In India, chai tea has been a tradition for centuries. The brew is a combination of Indian black tea with a unique blend of spices. It is consumed in the morning, the afternoon and is the first thing offered to houseguests. Chai vendors are a staple of the community and are often a source of news and gossip. In the U.S., Americans consume over 2.2 billion gallons of tea per year which 80 percent consists of iced tea. Iced tea was introduced to Americans in 1904 at the St. Louis World Fair by Richard Blechynden. As a tea merchant, he was finding it difficult to sell hot Indian black tea on a summer day so he brewed it through iced lead pipes creating a chilled beverage. Before this, sweet tea was enjoyed in the south. In 1744, tea seeds were brought to the U.S. as part of the Trust Garden of Savannah and became a commercial crop in South Carolina in 1848. In 1879, the first known recipe was published for sweet tea. Sweet tea remains a staple of the southern community and has spread across the U.S.

The Limoges Lemon Teapot Box is painted in blue and white with lemon slices arranged around the top and base. This item includes a porcelain lemon half.

The Limoges Gold and Blue Cup and Saucer Box is accompanied by a youtiao (Chinese breadstick), sugar cube and a spoon.

The Limoges Teapot on Stand Box is uniquely shaped and painted in blue, gold and pink. These color combinations make this piece elegant and traditional.

The Limoges Pink Tea Set with Roses is beautiful miniature tea set that would make a great gift for any collector!

The Limoges Black Cat at 5 O’Clock Tea Box combines our love for these curious animals and our favorite pastime! Painted with a classic red and white checkered tablecloth, this box will compliment your collection. 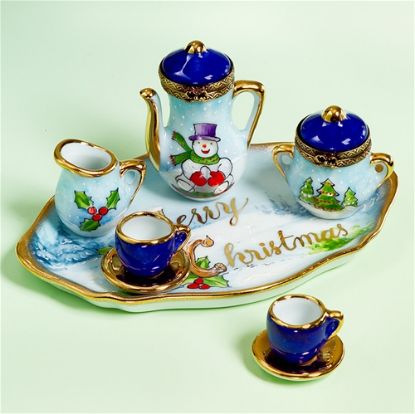 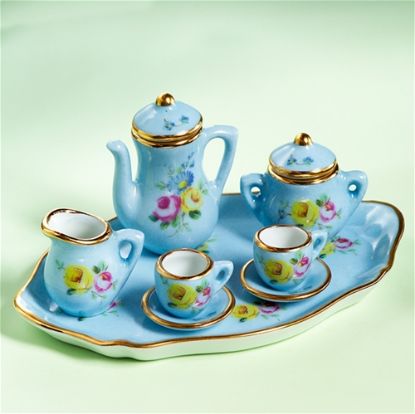 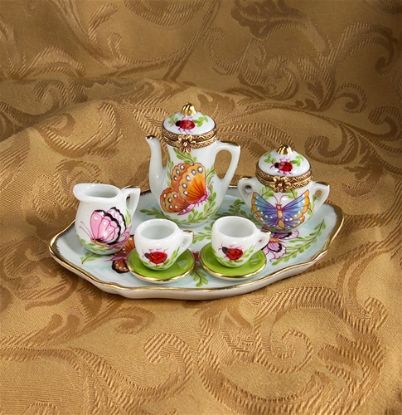 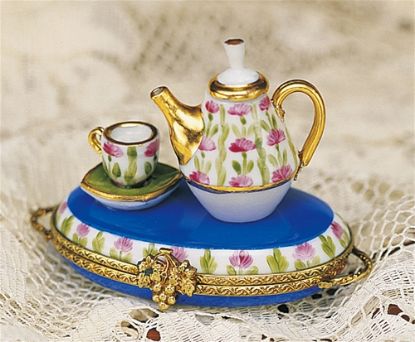 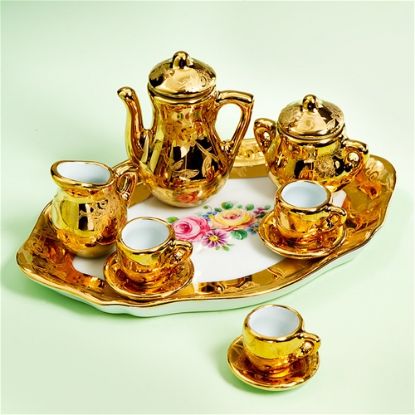 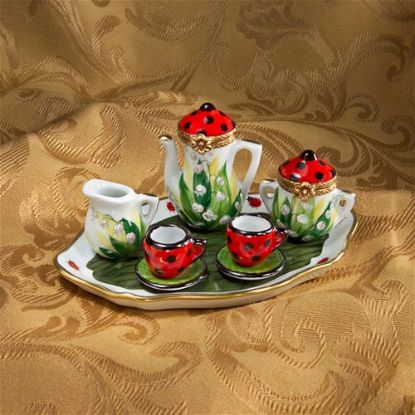 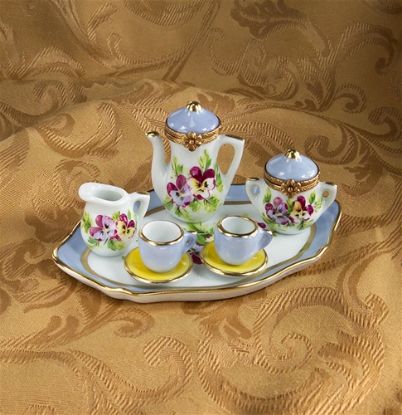 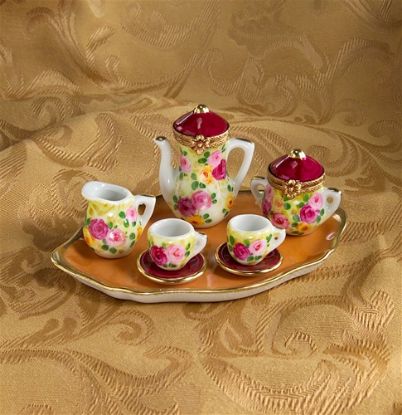 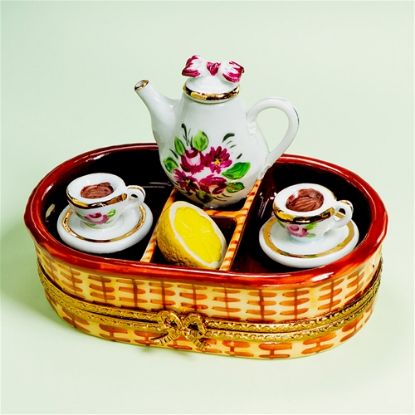 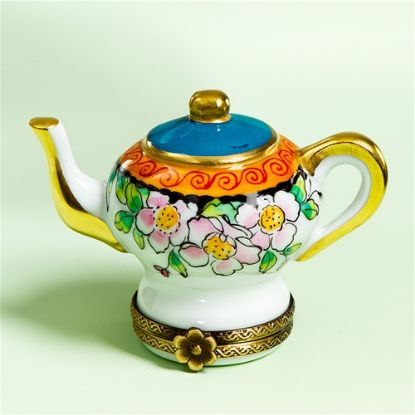 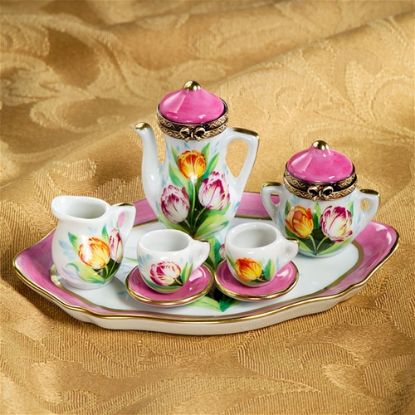