New York City is comprised of 5 boroughs and at its core is Manhattan. Densely populated, Manhattan is among the world’s major commercial, financial and cultural centers. The iconic skyscrapers bring approximately 65 million tourists a year and a large number of workers commute into the city via a variety of transportation, doubling the islands daily population. The Cottage Shop has commissioned artists to create the Limoges New York Landmarks Box and the Limoges Manhattan Skyline Box. These Limoges boxes are great representations of the popular landmarks and skyscrapers of NYC.

Completed in 1931, the Empire State Building is a 102-story skyscraper in Midtown Manhattan. The building has a roof height of 1,250 feet and is 1,454 feet tall including its antenna. The 86th Floor has the highest open-air observatory in New York. This deck provides a 360-degree view of New York. Tourists are able to see Central Park, The Hudson River and East River, The Brooklyn Bridge, Times Square, The Statue of Liberty and much more.  On the 102nd floor, visitors are able to experience the top deck which has views of the street grids and up to 80 miles away. Since 1976, the lights of the Empire State Building change color to recognize various occasions and organizations throughout the year. The Cottage Shop offers the Limoges Empire State Building Box.

The Statue of Liberty National Monument is located on the 12-acre Liberty Island and receives thousands of visitors daily. The statue was a gift from France to commemorate the friendship between the U.S. and France. Construction began in 1875 and was completed in 1885 in France. The completed statue was 151 feet tall and weighed 225 tons and had to be disassembled and shipped to NYC.  Richard Morris Hunt designed and built a pedestal on Bedloe’s Island. The Statue mounted on its pedestal stands 305 feet tall. Lady Liberty has been a symbol of American freedom, opportunity and a beacon for those seeking refuge. To honor Lady Liberty, our artists have created the Limoges Green Statue of Liberty Box, Limoges Statue of Liberty Box and the Limoges New York Liberty Lady Champagne in Case Box.

Located at the junction of Broadway and Seventh Avenue, Times Square is a major tourist attraction. The intersection is lined with large commercial buildings and is the center of entertainment. It is known for its pulsing lights of towering digital billboards. The street is filled with costumed characters and musicians. It is walking distance to all the popular theaters and the TKTS discount booth offers up to 50 percent off theater tickets. Times Square provides a great view of the iconic ball drop of New Year’s Eve. The Cottage Shop offers the Limoges Times Square Boot Box and the Limoges Year 2000 Times Square Box.

In Midtown Manhattan, Rockefeller Center consists of 19 commercial buildings covering 22 acres. Works of art like the bronze statue, Atlas, and the golden sculpture, Prometheus, are part of the Rockefeller appeal. The skyline from Top of the Rock has observation decks and a 360-degree view. Open from October through April, the ice-skating rink is an outdoor pleasure. The Channel Gardens are decorated all year. In the winter, there are angels and holiday displays that line the fountains and, in the spring, there are bright flowers and greenery. At 30 Rockefeller Plaza, you are able to watch live tapings of Saturday Night Live. For the month of December, you are able to visit the world-famous Rockefeller Center Christmas tree. The Radio City Music Hall hosts the Christmas Spectacular Rockettes along with other nationally touring entertainers. The Cottage Shop offers the Limoges Rockefeller Center Postcard Box which perfectly captures Rockefeller Center in December. To commemorate the Rockettes, who have been performing in NYC since 1932, The Cottage Shop presents the Limoges Holiday Rockettes Box, Limoges Holiday Performance Box, and the Limoges Holiday Performance Beerstein Box,

When getting around in New York City, there are a variety of transportations to choose from. The New York City Subway has 472 stations and is the busiest U.S. rapid transit system. There are over 13,000 licensed taxicabs and over 50,000 taxicab drivers providing transportation for passengers in all 5 boroughs in NYC. The best way to see all of the top attractions in NYC is to ride the double decker tour bus. These buses have an open top deck and are easy to hop on and off of. The Cottage Shop offers the Limoges Grand Central Station Subway Box, Limoges New York Taxi with Buildings Box, Limoges New York Yellow Taxi Box, and the Limoges New York Tour Bus Box. Our artists have created artistic replicas of these iconic vehicles.

Located between the Upper West Side and Upper East Side, Central Park is 840 acres of beautiful trees, landscapes, bodies of water and gardens. It is home to the Central Park Zoo, Bethesda Terrace, Alice in Wonderland bronze statue, Belvedere Castle, Carousel, Wollman Rink, Conservatory Garden and many other attractions. The Sheep Meadow is 15 acres of open lawn and is a designated quiet zone for picnicking and relaxation. The Cottage Shop offers the Limoges Central Park Picnic Basket Box, Limoges Lady at Central Park with Squirrel Box, and the Limoges New York Picnic Basket Box with Plates.

The Cottage Shop offers a variety of NYC Limoges boxes that would make beautiful additions to any collection or as great gifts. The Limoges New York Shopping Bag with Carriage Card is painted with the New York skyline including the Statue of Liberty. Our artists ensured that details weren’t missed when they painted a red apple on the back and a horse with carriage on the loose porcelain card. The Limoges New York Suitcase Box with USA Flag has a painting of the NYC skyline at night and the yellow highlights bring this box to life. The Limoges One Manhattan Beer Stein Box has the skyline painted in earth tones while the Statue of Liberty is painted in it’s true iconic green. The Limoges New York Birthday Cake Box is painted in pink and turquoise with a small skyline painted around the cake. The top hat with stars added to the top makes for a fun NYC birthday! 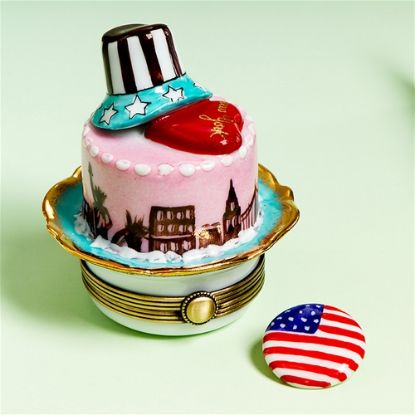 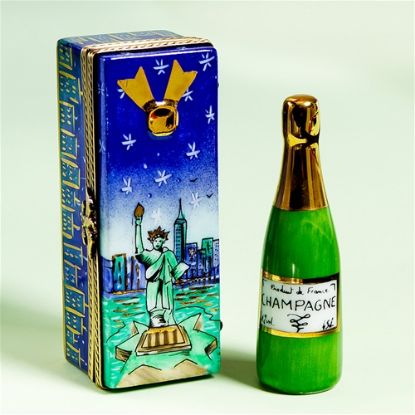 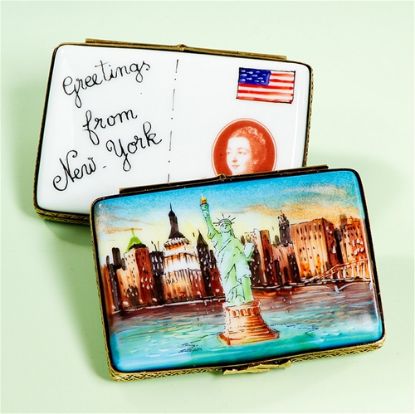 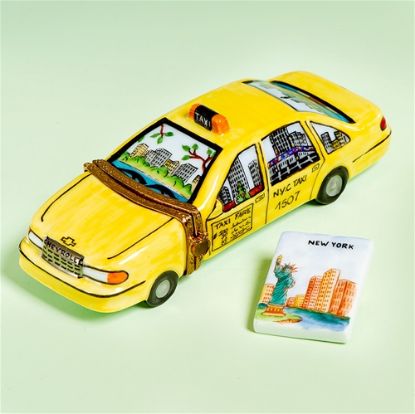