Pears are one of the most important fruit trees in the world. There are over 3000 varieties of pears globally. Pears are highly nutritious. They are a rich source of important minerals such as copper and potassium. Pears are also an excellent source of soluble and insoluble fiber. They are rich with flavonoid antioxidants which help fight inflammation. The common pear is cultivated in all temperate-zone countries. That includes both the northern and southern hemispheres. The trees are broad-headed and can grow up to 43 feet high. Pear flowers have 5 petals and are usually white or pink. Pears are eaten fresh, cooked and canned. Pears are also used to produce perry which is an alcoholic beverage made from fermented pears. The common pear has been cultivated since ancient times in Europe. The Greek poet Homer referred to pears as a gift from the gods. Early Romans developed over 50 pear varieties and spread them throughout Europe. In Greek and Roman mythology, pears are sacred to Hera, Aphrodite and Pomona. Hera is mother of the Olympian gods and is known as the goddess of marriage and childbirth. Idols of Hera were carved in pear wood. The ancient Chinese believed that pears were the symbol of immortality since pear trees have a long lifespan. If a pear tree was destroyed, it symbolized tragic or untimely death. Pears were introduced to the New World by colonists. In around 1630, English Puritan named John Endicott planted one of the first fruit trees to be cultivated by European settles in America. This was a pear sapling imported from across the Atlantic. The Endicott Pear Tree is believed to be the oldest living cultivated fruit tree in North America and it still bears fruit today. The Limoges Garden Pear Box with Ladybug is painted yellow with a blue butterfly, bumblebee and several red ladybugs. This item combines the love of pears with the love of nature! The Limoges Double Pear with Perfume Bottles Box is uniquely shaped and includes two matching glass perfume bottles. The Limoges Blue Pear with Strawberries Box has painted pink flowers with strawberries around the box and has a crafted strawberry clasp. The Limoges Mini Yellow Pear Box is a popular item on a smaller scale and is painted with small dot details and green leaves. The Limoges Green Pear Teapot Box is crafted with a handle and spout and would make a great addition to your kitchen collection! 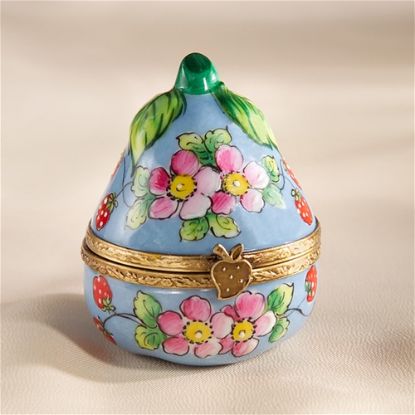 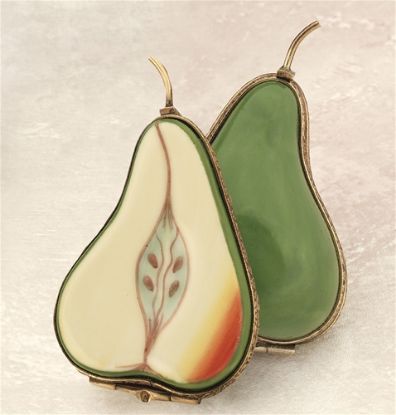 Limoges Green Half Pear Box, Each 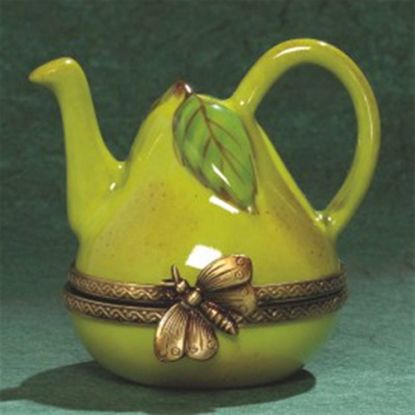