The Cottage Shop offers a variety of Limoges Cow Boxes. Cattle play an important role in agriculture. Domesticated bovine such as cows, provide us with dairy, meat, labor and by-products. Cows are descendants from the wild aurochs of Eurasia. Due to overhunting and loss of habitat, the aurochs became extinct in the 1600s. Cows have distinct cloven hooves and are from the order Artiodactyla. Domestic female cows are called different names at various ages. A baby cow is called a calf; a female cow that has not given birth yet is called a heifer and once given birth is given the name cow. A male cow is known as a bull. Young neutered males are usually raised for beef and are called steers. Adult neutered males are used for draft purposes and called oxen. Adult males could weigh between 1,000 and 4,000 pounds. Adult females can weigh between 800 and 2,400 pounds. Both genders have horns but some are bred genetically hornless. Cows have wide mouths and 32 specialized teeth for tough vegetation. Cows will chew regurgitated, partially digested, food for up to 8 hours each day. They have a massive four-chambered stomach that acts as a fermentation vat. Each chamber aids in the digestion process and absorbing of nutrients. Cows are able to give up 25 gallons of milk each day. In the U.S., the majority of dairy cattle are Holsteins. Holsteins are black and white with unique patterns. Another popular dairy cow is the Jersey with varies from dark brown to fawn and sometimes have splashed white patterns. Cattle help produce healthier grasslands. They graze on rotation and increase the soil’s capacity to store carbon. Their hoof action tramples plants, breaks up soil, incorporates seed into the soil and then compacts the soil. Cows contribute to the nutrient cycling by depositing nitrogen-rich urine and feces. Different variations of cows have been selectively bred to emphasize valuable characteristics.

The Limoges Black and White Cow Box showcases a cow grazing on a green base with dark green grass. This item is complete with black patterns throughout the body.

The Limoges Brown Cow Box has fawn coloring with white areas and a black collar with a bell.

The Limoges Cow by Fence with Milk Box has a silver milk canister next to this mooing cow and includes a porcelain milk bottle.

Besides being used for milk and meat, cows are used as a source of leather, sporting events, and stearic acid derived from cow fat is used in a variety of household products. Bulls have been used since ancient Mesopotamia for spectacles and combats.  Excavations on the island of Crete revealed Minoan frescoes from 1500 BCE depicting bull games where people launched over bulls by grabbing their horns. Early bullfighting in Spain can be traced back to 711 A.D. where they were held to honor the coronation of King Alfonse VIII. In 1611, the first cow arrived in America. Starting in the Jamestown colony, nearly every family had its own cow until the 1850s.

The Limoges Bullfight Arena Box has a torero holding a red cloth next to a black bull. This item includes a porcelain Spanish flag.

The Limoges Wall Street Bull Box is a great for inventors or those who watch the market. When the stock trends go up, an inventor becomes bullish! This item has a nasal ring, is dressed in a suit and the base is covered with Wall Street headlines.

Cows are seen as sacred animals in many religions. In Hinduism, the cow is a symbol of life and should be protected and revered. The goddess Aditi is referred to as the mother of gods and she is often represented as a cow. In Jainism, humans must avoid all killing and slaughter of living beings including cattle. In Ancient Egypt, the goddess Bat is depicted with a human face and cow ears and horns. The goddess Hathor is depicted as a star studded cow or a woman with a cow’s head.  The goddess Hesat is the earthly manifestation of Hathor and is known as the cow goddess.

The Limoges Cow Over the Moon Box depicts a scene from the nursery rhyme with a brown and white cow jumping over a moon. This sweet item is great for kids.

In Greek mythology, Io was the first priestess of Hera. Zeus fell in love with her and in order to protect her from Hera, he turned her into a white cow. Hera wanted the cow but Zeus kept a watchful eye on her. Eventually, Io fled across the sea into Egypt where she was restored to her original form and gave birth to Epaphus. Io was identified with the goddess Isis. Epaphus was identified with the sacred bull, Apis.

In Norse mythology, the cow Audumla nourished the giant, Aurgelmir, with her milk. Audumla licked salty rime covered stones in order to nourish herself. The stones were licked until they became the shape of a man named Buri. Buri became the grandfather to the god Odin and his brothers.

The Limoges Cow Cook Box depicts a cow dressed in an apron and dress flipping an omelet in a frying pan. This item would be a great piece for the kitchen! 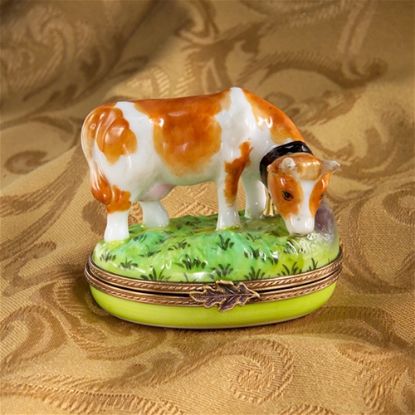 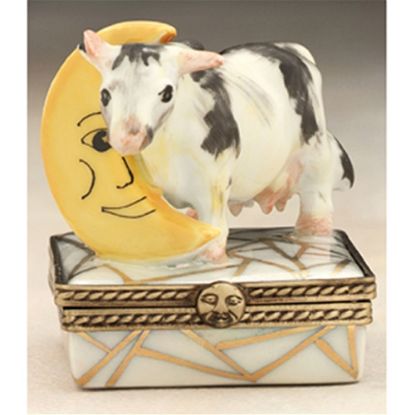