The Cottage Shop offers a variety of Limoges Turtle Boxes. Turtles are considered to be any reptiles with a body encased in a bony shell from the order Testudines. There are about 356 species of turtles including tortoises. Turtles live on land, salt water and fresh water throughout the globe except for Antarctica. The tortoise lives exclusively on land and has distinguished features that differ from other turtles. The shell of the turtle has a carapace top and a plastron bottom. These bony structures are joined at the side of the body to create a rigid skeletal box. The shell is an integral part of the body and will remain throughout the turtle’s life. Turtles have a long evolutionary history and are quit diverse. They range in all sizes from the Speckled Padloper Tortoise which measures up to 4 inches long to the Leatherback sea turtle which measures up to 7 feet long. The turtle’s shell protects them from predators. Some turtles have flat shells to allow them to crawl into crevices to hide and others have a dome shell to make it harder for predators to hold in its mouth and crush. Alligators and crocodiles will crush the shell of freshwater turtles. Sharks will attack sea turtles. None of the present turtles have teeth. They have keratin sheaths with sharp edges that fit into their skulls like a pair of false teeth. Present day turtles have evolved from their ancestral forms that possessed teeth and shells that lived over 200 million years ago. Even though turtles are not social, some species may inhabit the same areas and congregate along the same stream. Each of these species has different food and feeding behaviors. The snapping turtles are carnivorous and will eat fish, snakes, frogs and small birds. The stinkpot turtle mainly eats insect larvae, snails and carrion. Tortoises are herbivores and will eat a variety of plants. Turtle’s reproduction age depends on the species and varies from about 3 years old to 50 years old. All species of turtles lay eggs on land. Sea turtles will migrate hundreds of miles from their feeding areas to nest on the beaches where they hatched. Some river turtles will migrate far distances to find large sandbars to nest. The eggs laid in a single clutch vary between species. The small turtle species lay only a few eggs. The hawksbill turtle produces between 140 to 160 eggs and the olive ridley turtle produces between 105 to 110 eggs. The leatherback sea turtle lays about 50-90 eggs per clutch. Most species lay eggs annually but some lay every other year. Other species may lay several times in one nesting season. The sea turtle lays multiple clutches in each nesting season but only nests every 3 or 4 years. Egg development and sex is dependent on temperature. Warm temperatures speed the development and cooler temperatures slow it down. Narrow range temperatures of 82 degrees Fahrenheit produces almost equal numbers of females and males. Above range temperatures produce all female hatchlings and below range temperatures produce all male hatchlings. Global warming and shifting climate patterns have affected sex ratios for some species. Incubation ranges between 45 and 75 days for most species.  The hatching process consists of two events. The first is the exiting of the egg and the second is the emerging from the nest. The hatchling has a pointed snout that is used for pushing and breaking the eggshell. Once out of the shell, hatchlings start to dig upward. In some species such as the sea turtles, several hatchlings work together to dip out of the nest. Hatchlings lack the required energy to dig out alone. Hatchlings are vulnerable and many become meals to predators. Most turtles such as the American box turtle will likely live 2-3 decades. Sea turtles can have a life span of 60 to 70 years. Turtles living in captivity have been reported to live over 60 years. The oldest known turtle in the world is Jonathan. He is a giant tortoise residing on St. Helena Island in the South Atlantic. He hatched in the early 1830s and has been on the island since the 1880s. He has been long cared for by humans on the grounds of the historic governor’s mansion.

The Limoges Green Sea Turtle Box with Babies is an adorable gift for turtle fans and mothers! This item includes porcelain hatchlings with detailed painted shells.

The Limoges Mother and Baby Turtle on Sand Box has a strikingly yellow painted base with gold and blue polka dots.

The Limoges Turtle with Lettuce Box is designed with 3D lettuce patch and a turtle looking for a snack.

Turtles are often seen in pet stores and are frequently kept as pets. Their ornate shells make some species valuable. Before plastics, tortoiseshells were used for decorative items and eyeglass frames. Sea turtle species and their eggs have been killed for their meat around the world to extinction. In Florida, native settlers ate their giant tortoises to extinction 11,500 years ago. In Madagascar, first colonists ate the island’s giant tortoise to extinction between 2,300 and 2,100 years ago. On the island of Mauritius, European settlers eliminated their giant tortoises during the 1700s. In China, many species of turtles are used for food and medicine. Many species have disappeared from China and are now imported from other areas.

The Limoges Sea Turtle on Wave Box is designed with texture and painted to show the details of the ocean waves with a sea turtle riding on top. The colors of this piece would complement any collection!

The Limoges Turtle on Heart with Pink Flowers Box is painted with pink tropical flowers around the top and base.

In Hindu mythology, Kurma is one of the 10 avatars of the god Vishnu. Vishnu took the form of a tortoise to support the churning stick on his back in the myth of the churning of the ocean of milk. In ancient Mesopotamian mythology, the god of water Ea is associated with a turtle and the god Enki created a turtle from clay to help him recover the stolen tablet of destinies. In ancient Greece, the slave storyteller Aesop lived between 620 and 564 BCE. He created the folktale “The Tortoise and the Hare” which tells the story of a race between unequal partners that through ingenuity and trickery, the slow-moving tortoise overcomes his stronger opponent. In Japanese mythology, Urashima Taro is a fisherman that is rewarded for rescuing a turtle and is brought to the palace of the Dragon God. In Native American culture, the turtle represents Mother Earth. They believe that the turtle dove into the primeval waters to retrieve mud to create Mother Earth.

The Limoges Two Turtles on Heart with Hearts Box is painted with various colored hearts and has a crafted double heart clasp.

The Limoges Turtle Box with Cabbage is a uniquely shaped box with a turtle standing upright with a walking stick and carrying a basket of cabbage. This item includes a porcelain cabbage. 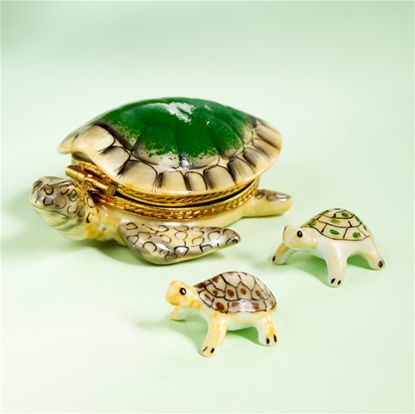 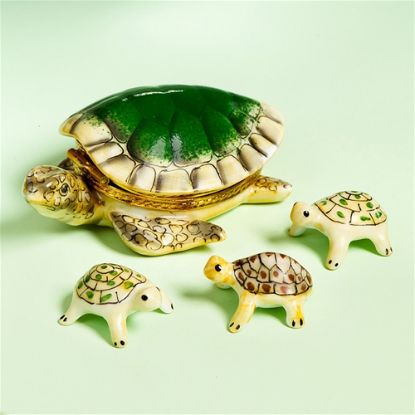 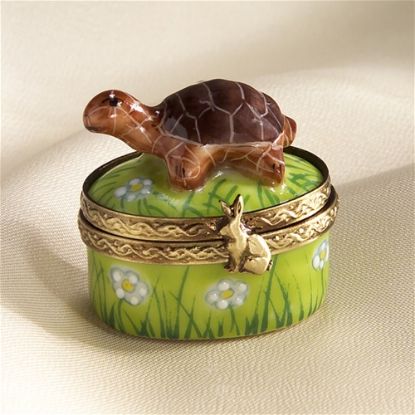 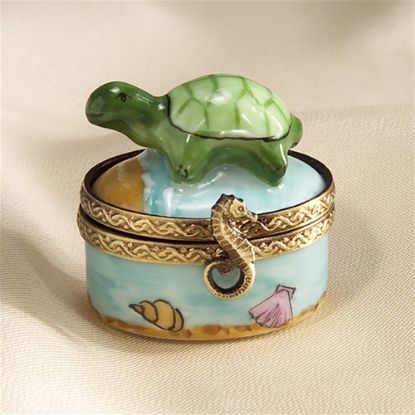 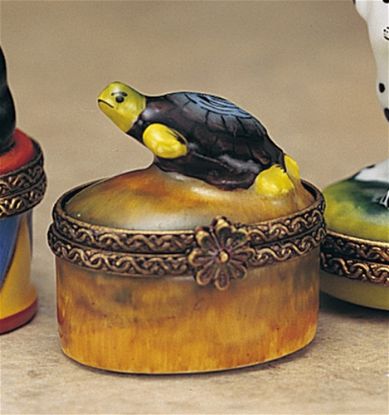 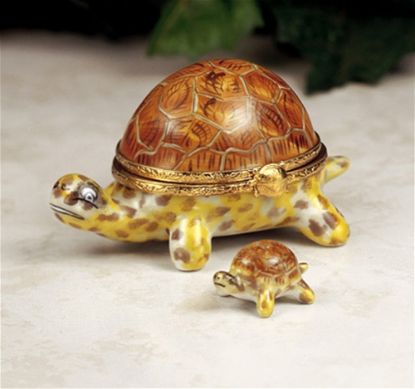 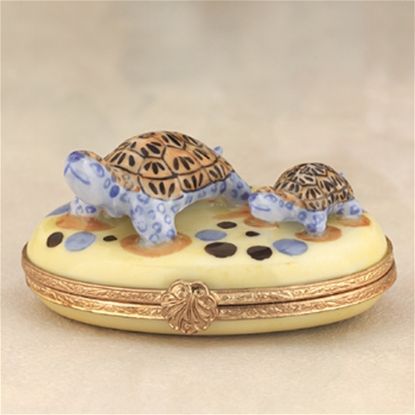 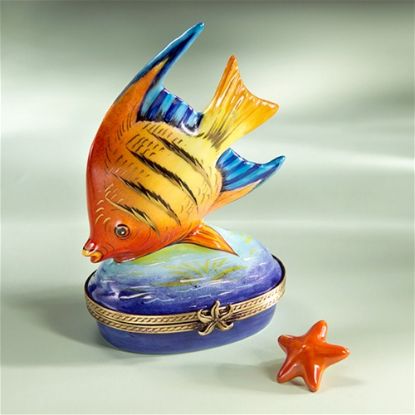 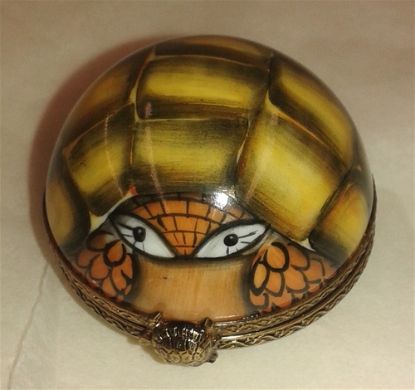 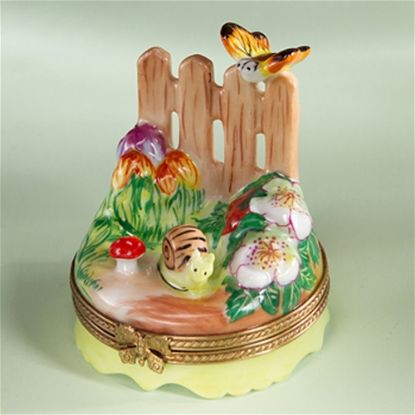 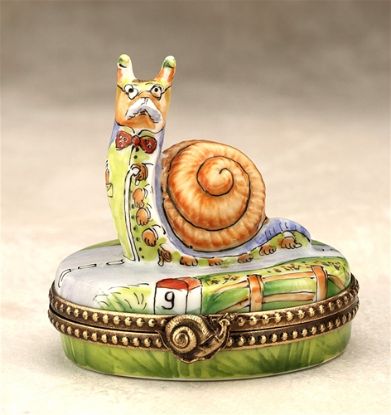 Limoges Snail on the Grass Box 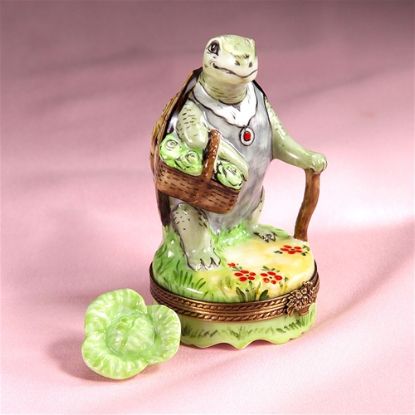 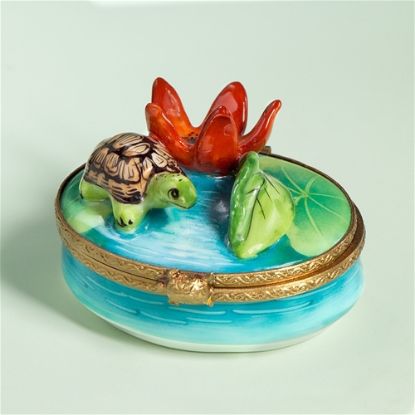 Limoges Turtle by the Water Box 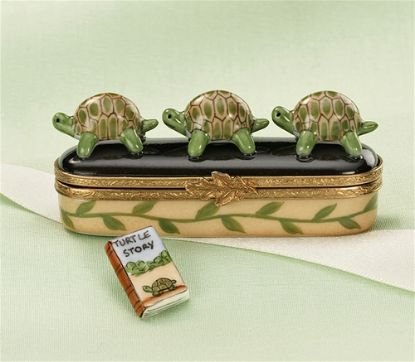 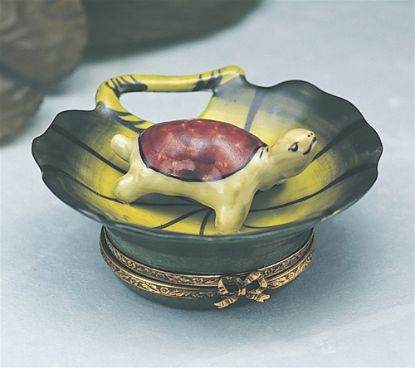 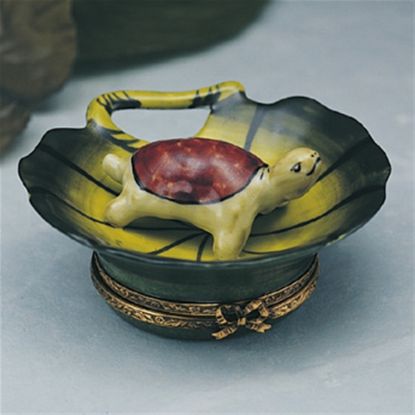 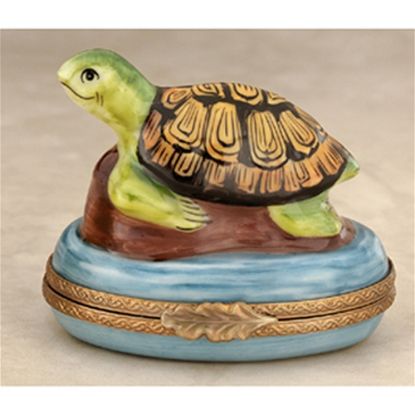 Limoges Turtle on Rock by the Shore Box 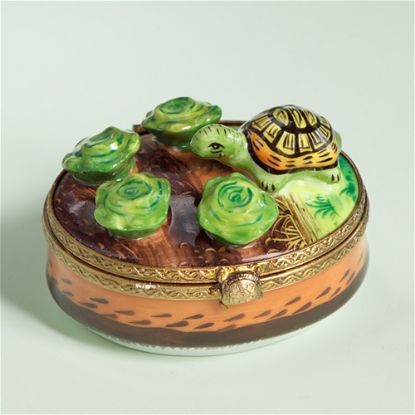 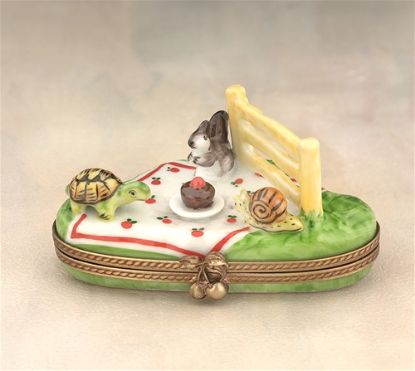 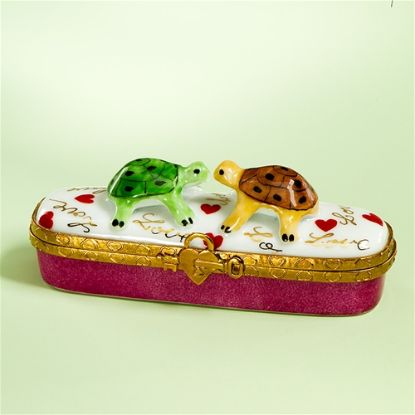 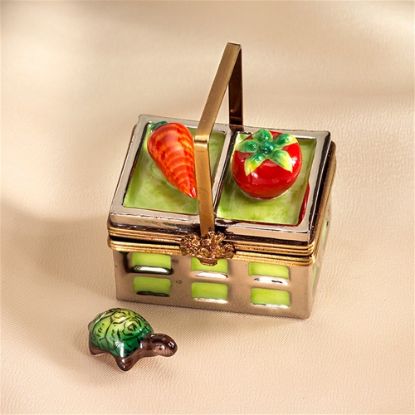