Swans are majestic animals that are well known for their grace and are often seen gliding across lakes. In society, swans have represented romance, elegance and refinement. Swans are also a symbol of everlasting love. There are 6 or 7 species of swans in the world and 3 of those species are native to North America. The trumpeter swan is the largest native waterfowl and heaviest flying bird in North America. They can fly up to 60 miles per hour. Swans are known to mate for life. Swans can live up to 20 years in the wild and 50 or more years in captivity. Swans usually lay between 3 to 8 eggs. Once hatched, the cygnets are looked after by their parents for a year. Cygnets have grey feathers until they reach about 20 pounds. The Limoges Swan and Cygnet Box has a white mother swan nestled on a green base with her newly hatched cygnet. The Limoges Faberge Style Turquoise Egg with Swan Box is painted with gold lattice designs in the Faberge style tradition and showcases an elegant white swan inside.

Swans are used in many examples of literature and myths through the centuries. The Greek God Apollo is associated with swans. The myth states that when Apollo entered the world, sacred swans circled the island 7 times on the 7th day of the month and Zeus gifted him with a golden chariot drawn by swans. In the story, Leda and the Swan, Zeus disguises as a swan and seduces the Aetolian princess, Leda. She conceived Helen of Troy and Polydeuces. The Limoges Romantic Swans with Roses Box has a pair of swans angled towards each other and a garland of roses and leaves painted on the base.     The Limoges French Romantic Couple with Swans has a detailed romantic scene of a woman sitting on a bridge with her companion and they are looking down at a pair of swans swimming nearby.

In Irish mythology, the Children of Lir tells the story of the king and ruler of the sea called Lir, his 4 children and his 2nd wife, Aoife. Aoife possessed magical powers. After time, she grew jealous of the attention Lir gave to his children. One day, she took the children swimming in a lake and casted a spell to transform the children into swans. They lived as swans for 900 years and the only way the spell would be broken is by hearing the ringing of a bell for the arrival of St. Patrick in Ireland. After hearing the bell, the children took human form again. They started aging rapidly so the holy man, Caomhog, quickly christened them before they passed away. The Limoges Swan on Blue Lake Box is a beautiful mute swan with a long neck and orange bill with black knob sitting on a blue base.

In Norse mythology, among the roots of the world-tree Yggdrasil is the sacred well of Urd. The water of this well is so pure that is turns all things it touches white. Legend states that the original two swans drank from this well and all their descendants also became white. The Limoges Two Swans with a Rose Box is painted with pink roses on the base with a 3D rose in between two swans facing each other.

In classical literature, the phrase swan song is used for a final performance given before death. The phrase swan song comes from the ancient myth that upon death, the mute swan would sing a beautiful song after having been silent during most of their life. The Limoges Swan in Egg with Pansies Box is painted roses and pansies framed with blue paint and showcases a white swan atop of blue and green plate.

Tales like The Ugly Duckling and The Trumpet of the Swan are classic children’s stories that feature a swan protagonist. These stories represent a character that doesn’t quite fit in but eventually finds its place.

Pyotr Ilyich Tchaikovsky composed the Swan Lake which featured a Prince Siegfried and the lovely swan princess Odette. Due to the evil sorcerer’s spell, Odette spends her days as a swan and her nights in her human form. The sorcerer’s daughter, Odile, is the black swan maiden who tried to deceive the Prince into breaking his vow of love for Odette. The Limoges Ballerina in White with Black Swan Box has a base painted in a royal blue like the lake and the ballerina is in the 5th position pivoting on a post. The Limoges Swan Lake Ballerina Box has a ballerina in the 5th position on a lake with a white swan and includes porcelain ballet slippers. 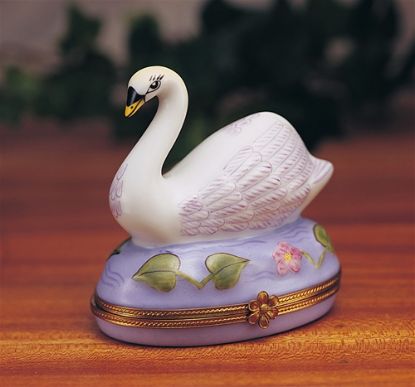 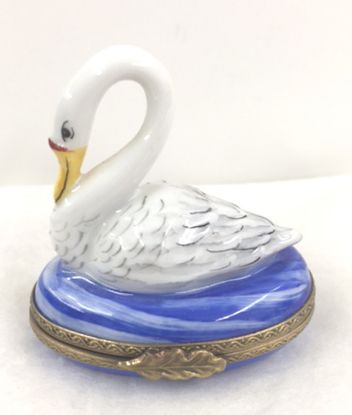 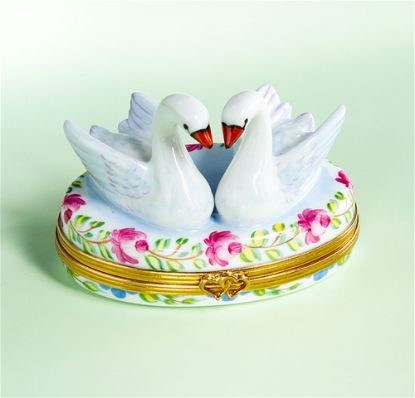