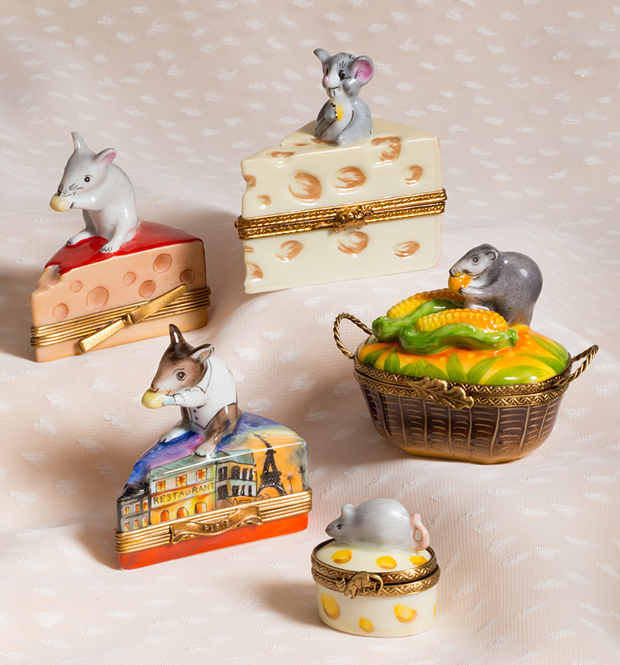 The Cottage Shop offers a variety of Limoges Mouse Boxes. A mouse might be a common rodent but history has turned this small furred creature into a cute figure of pop culture. Mice are naturally nocturnal but will occasionally forage during the day. They are agile climbers and capable swimmers. They burrow and build nests of dry vegetation. Mice are preyed upon by reptiles, mammals and birds such as owls. The mice diet varies between species. The house mouse consumes seeds and insects outside but will eat anything digestible inside. Other species will eat seeds, insects and other invertebrates. Mice may breed throughout the year. Some species living in southern latitudes will breed during the wet season and those living in the northern latitudes will breed from spring to fall. Species such as the house mouse can produce up to 14 litters per year. By the 1700s, China and Japan domesticated many varieties of mice as pets. Europeans imported different species from Japan and bred them with their local mice. In Victorian England, the National Mouse Club was founded by Walter Maxey in 1895. Fancy mice were prized and traded during this time. In 1900, Abbie Lathrop bred a variety of small animals including mice for hobbyists in Granby, Massachusetts. In 1902, Harvard University introduced Lathrop’s fancy mice into their laboratory. They worked on developing strains from the original colony and the primary focus was to clarify the genetic basis of cancer. Later, house mice served as a preferred species for biomedical research due to their physiological, anatomical and genetic similarity to humans. They also have a high degree of adaptability. Highly inbred strains with traits relevant to important human diseases became available.

The Limoges Mouse on Corn Box is designed like a basket holding 3D corn on top with a perched gray mouse eating a kernel.

The Limoges Mini Mouse on Cheese Box is a miniature item that is painted to look like swiss cheese and has a gray mouse on top.

The Limoges Computer with Mouse Box has a crafted clasp that also acts as a long tail for the mouse.

In the 19th century, Japanese lacquer master, Shibata Zeshin, loved mice and used them in his art. He painted them in different ways. Sometimes they were in groups, by themselves, dressed as a monk or even on the shoulder of the god Daikokuten.

The Limoges Two Mice on Box with Hearts is a romantic item painted in red and gold hearts with “Love” written all over the top. Two mice sit atop facing each other eating a piece of food.

Native Americans use mice in many of their folktales. Due to their vigilance and size, mice are used to show tribes that their courage and persistence is what matters. Their size even enables them to succeed at tasks where others have failed. Haida mythology includes stories about the mouse woman who is a helper or advisor to those who are on a journey or about to travel between worlds. Hopi legends tell a story about a village threatened by a hawk. The hawk would kill their chickens. The village decided that the hawk needed to be killed but didn’t know how. A warrior mouse volunteered to kill the hawk. The villagers were amused by this but came to see the mouse in action. The mouse dressed in warrior paint and danced. He drove a sharp spear in the ground next to an opening of the tunnel he dug. When the hawk swooped down to snatch the mouse, the mouse dropped into the hole and the hawk impaled himself on the spear. The villagers were amazed and honored the mouse as a hero.

In Ancient Troy and the Greek islands, the god Apollo was worshiped as the Mouse Daemon or the Lord of Mice. When Apollo was in a bad mood, he would cause an invasion of mice transmitting plague to a place and when he was in a good mood, he would destroy all the mice.

The Limoges Mouse on Red Cheese Box is shaped like a slice of cheese from a wheel coated in red wax. The small gray mouse that sits atop is nibbling on a piece missing from the corner.

In 1928, Walt Disney created the successful cartoon character, Mickey Mouse. Mickey Mouse is an anthropomorphic mouse with big ears that is portrayed as cheerful and mischievous. He was the basis of early popularity for Disney’s animation and has become the most popular cartoon star in the world.  In 1969, Leo Lionni published the children’s book, Alexander and the Wind-Up Mouse. This story features a mouse named Alexander that wishes he was a wind-up mouse so he could be loved and cuddled too. Lewis Caroll’s novel, Alice’s Adventures in Wonderland, included the sleepy Dormouse at the Mad Hatter tea party.

The Limoges Dormouse from Alice Box features the mouse with big ears peering out of a tea cup painted in green with flowers.

The Limoges Mouse on Gruyere Cheese Box has an adorable mouse with two front teeth and big ears sticking out of a chunk of cheese.

The Limoges Parisian Chef Mouse Box is painted with a Paris scene on a cheese slice shaped box. The mouse that sits atop wears a white chef’s coat.

The Limoges Sea Saw Mice Box is a uniquely designed box with a wooden painted sea saw swing hanging from a stand containing two mice dressed in sailor outfits. This item is complete with a crafted sailboat clasp.

The Limoges Wind Up Mouse Box is painted gray with pink ears and has silver painted wind up key on top.

The Limoges Blue Mouse Baby First Tooth Box has a painted blue base and a tiny mouse with a blue shirt printed on top. This item would make a great gift to welcome new babies! 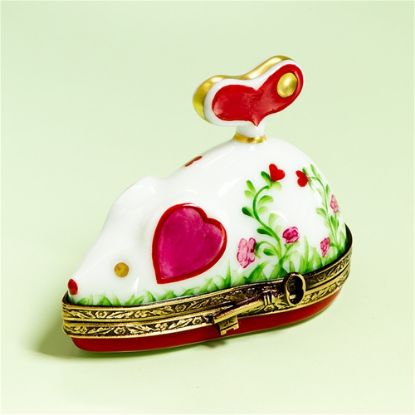 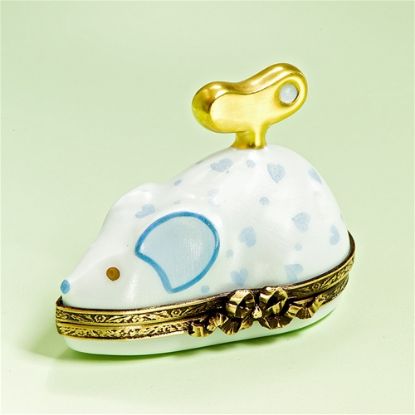 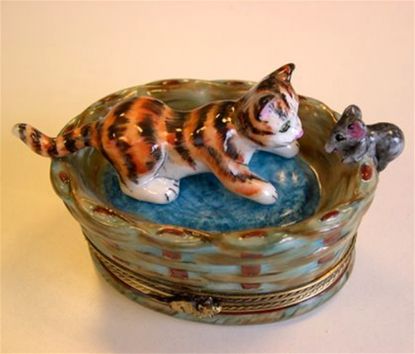 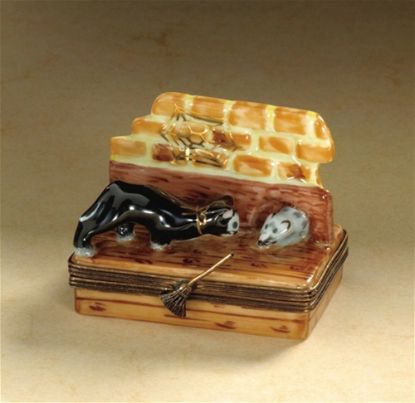 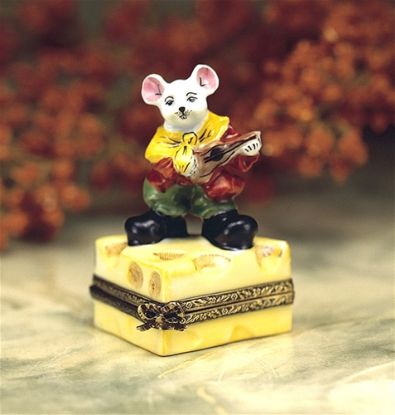 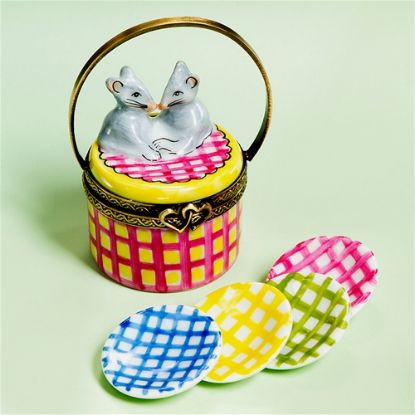 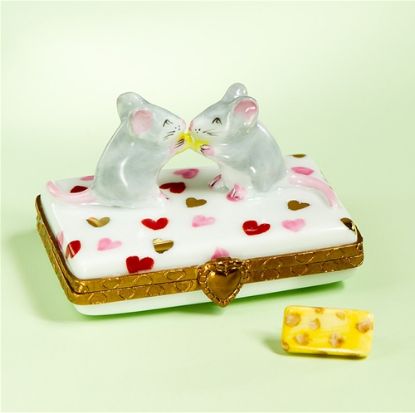 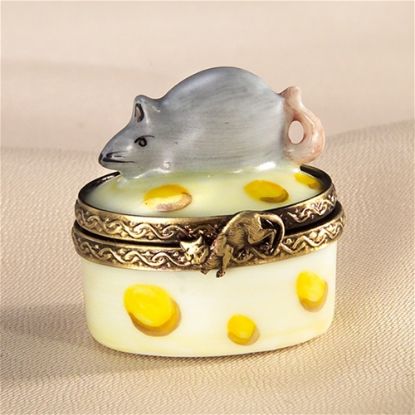 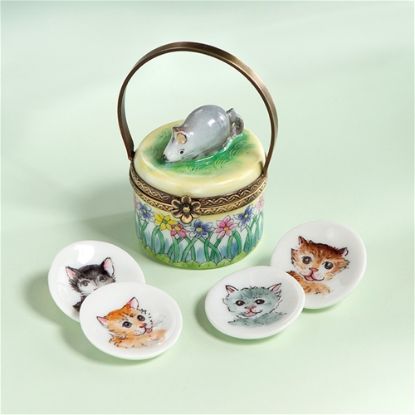 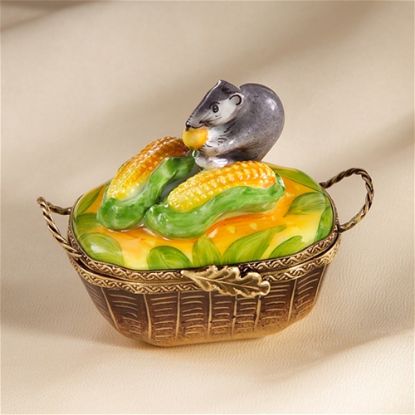 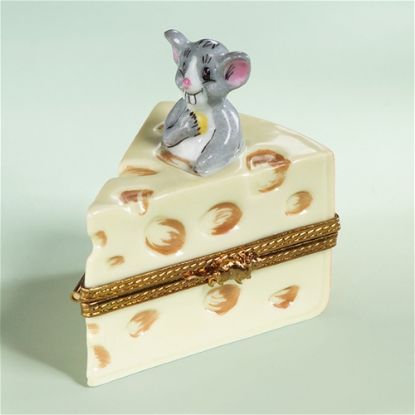 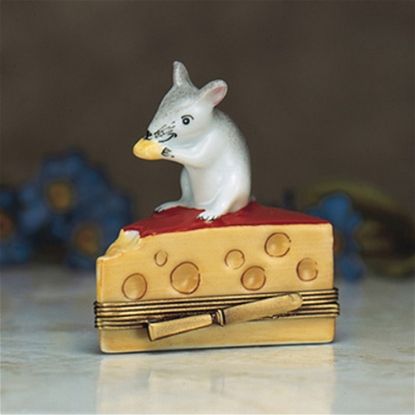 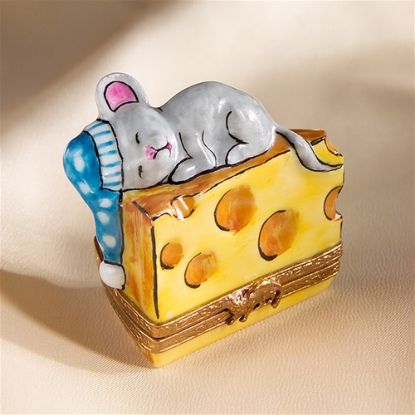 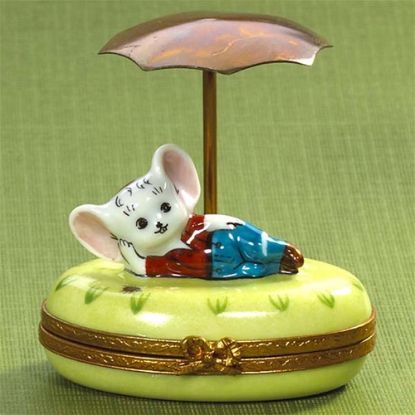 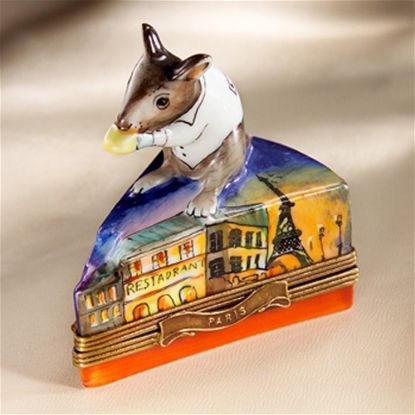 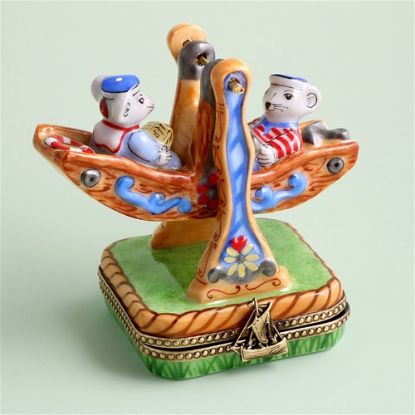 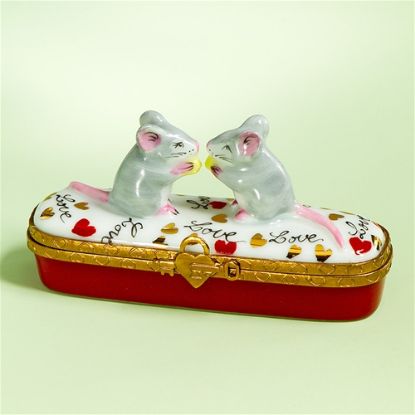 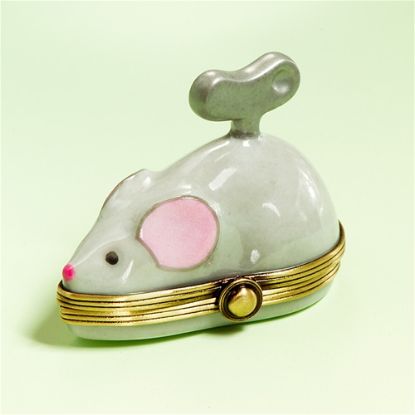